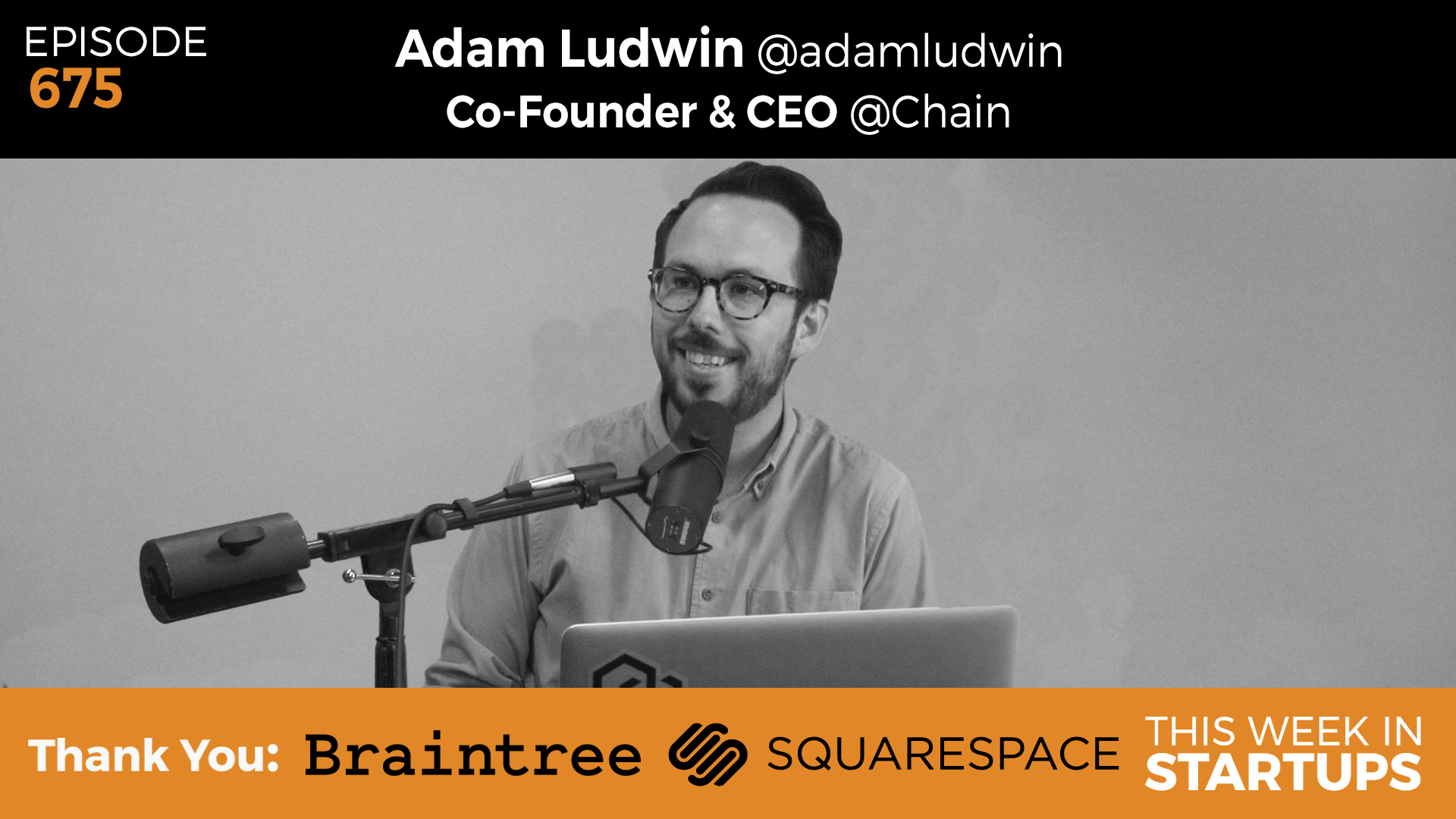 If you’re running a business, it’s only a matter of time before you’ll have to deal with declined transactions. To learn more about how Braintree can help, visit Braintree­payments.com/twist.

Entrepreneurs are driving all of the innovation today, and this episode’s guest is no exception. Adam Ludwin, CEO & Co-founder of Chain created a tool that’s helping top financial firms (NASDAQ, CapitalOne, Citi, Fidelity, Visa & more) deploy the blockchain. Adam demos his technology, and offers a fascinating and super clear explanation of how/why bitcoin & the blockchain were developed, how it works, common misperceptions, how the DAO hack happened & long-term effects, and how he got that insanely amazing domain name. Jason and Adam venture deep into other tech & culture territory, including whither Apple, who will buy Twitter, Snapchat v. Instagram, religion, oppressed societies, Hamilton (The Musical), and the hardest part of a startup (hint: it’s not the starting up).

00:29 Welcome from Jason. Only entrepreneurs can solve problems & truly innovate in technology these days.
01:51 Was introduced to bitcoin back in 2011. Thought it would be dangerous, destabilizing, and transformative. Has barely been any of these things and mostly been a disappointment to VCs.
04:05 However: out of this, Blockchain has emerged as the underlying architecture of cryptocurrency, the true innovation, and here to stay. Introduces guest Adam Ludwin, CEO & Co-founder of Chain.
05:38 Adam explains origins of company as developing a bitcoin API. Early customers (NASDAQ, Fidelity) didn’t at the time understand the mechanics of bitcoin. Adam explains the difference between digital copying (email) and digital transferring (money). That was the “aha!” moment.
12:06 Partner break – Thank you, Braintree.
15:53 Adam tells the story of how he got the amazing domain, Chain.com.
17:54 Further debate on bitcoin, use cases. It’s like BitTorrent. It will always be used by people who are off the grid, or want to be.
19:55 Discussion on ethereum, the number 2 cryptocurrency behind bitcoin. Segue into explaining DOA (Decentralized Autonomous Organization) project.
25:35 Partner break – Thank you, Squarespace.
28:02 Back to ethereum, and its vulnerability. Its smart contract is written by a program/code. On to the DOA hack & fall-out. (There are two ethereum networks now.) Long-term repercussions on financial institutions, developing their own cryptocurrency systems.
35:37 Example of The Pudding Guy, accumulating many frequent flyer miles by taking advantage of a promotion by Healthy Choice Foods in 1999. Healthy Choice Foods ended up awarding him 1,253,000 frequent flyer miles.
37:46 Financial infrastructure is so broken. Fintech startups are mostly trying to patch up current systems. Adam says Chain is rewiring the underlying system.
40:53 Adam does a Chain demo on phones & laptop, with wallet-to-wallet transfers of different kinds of digital currencies, including reward points, $, while also showing the underlying blockchain architecture.
48:21 Reminds Jason of Justin Timberline’s sci-fi movie “In Time” and his arm code that always showed a bitcoin balance.
49:28 Adam explains Chain business model. Yes it’s expensive, and scales with volume. They just did first production network with NASDAQ, for private market security. Their entire cap table is on blockchain.
51:28 Theory that in the future, company stock will move as freely as public company stock. Jason asks, if you could buy only three stocks and hold them for the rest of your life? What would they be.
52:56 Discussion about Apple. Still innovating? They break it down. Apple vs. Tesla, Uber, Google, Amazon, Square.
01:00:00 Onto Twitter. It’s a mess, but will it ever go away as a product? And who will buy it? (Google or Facebook?)
01:07:33 Onto to Instagram v. Snapchat. Facebook just straight up copied Stories, and is unapologetic. Debate: Jason is disgusted, Adam thinks it’s good for users. Other examples of copycats.
01:14:52 Example of Theranos and people should start calling b.s. more. Who is candid in Silicon Valley? Segue into political correctness, and the “Sapiens” book and its thesis that indigenous not necessary better, there is such a thing as progress. Onto globalization and the need for some states/religions to evolve.
01:19:40 Chain is hiring! Who are they looking for? What is the culture like? Be interdisciplinary.
01:20:26 How hard it is to be a founder and one of the most important lessons of entrepreneurship.