Deprecated: File Theme without header.php is deprecated since version 3.0.0 with no alternative available. Please include a header.php template in your theme. in /home/thiswee/public_html/wp-includes/functions.php on line 5579
 E660: Antonio Garcia Martinez shares insights from his bestselling ”Chaos Monkeys: Obscene Fortune and Random Failure in Silicon Valley," revealing the secrets of Facebook, Twitter, Y Combinator, dodgy SV deals & startup struggles | This Week In Startups 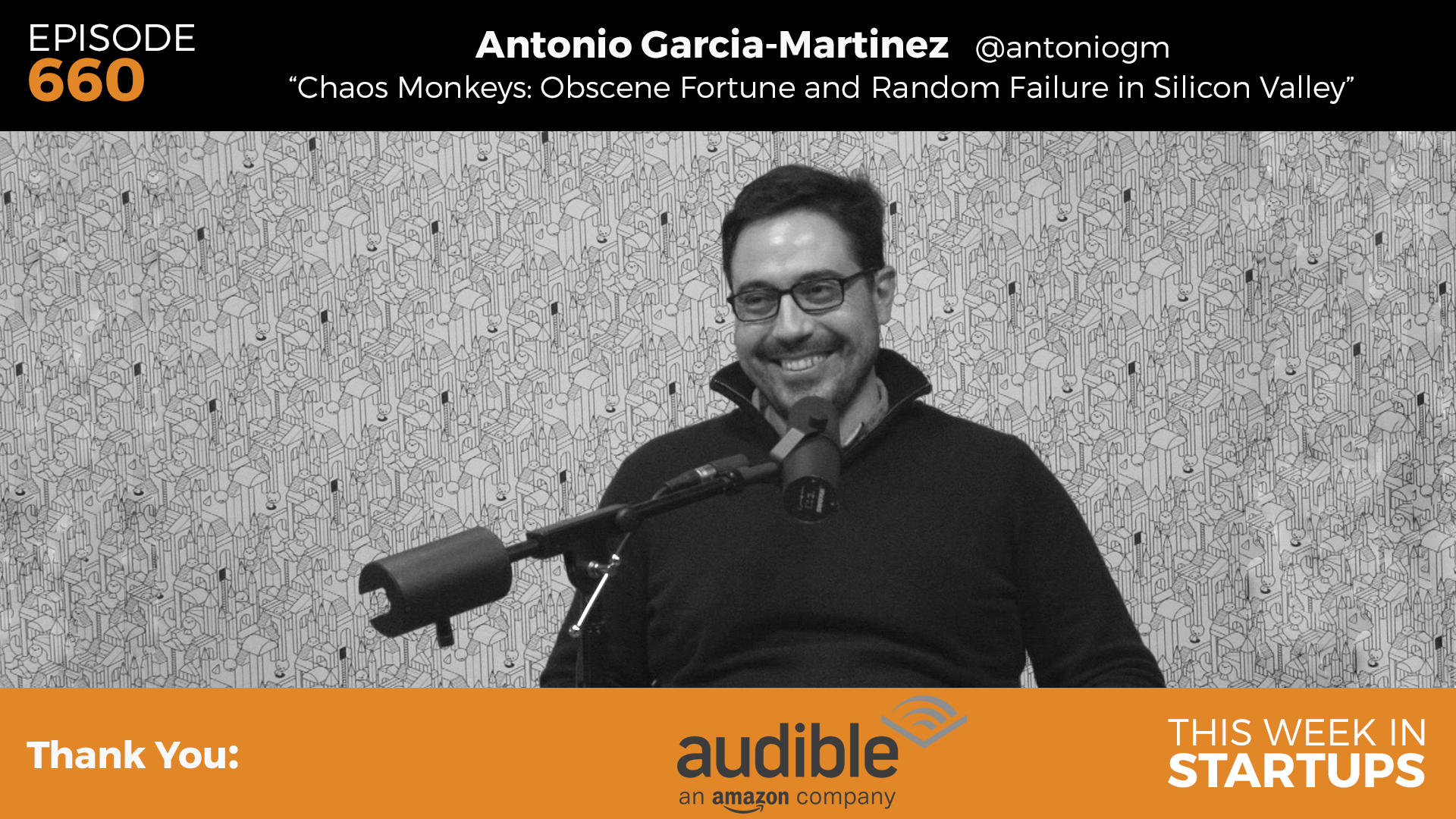 Audible, the leading provider of audiobooks with over 180,000 titles. Get your free audiobook at audible.com/twist. Jason’s pick of the week is Decide to Play Great Poker, written & narrated by: Annie Duke.

The world of startups is a dog-eat-dog world, and Antonio Garcia Martinez shares all in his brutally candid book “Chaos Monkeys: Obscene Fortune and Random Failure in Silicon Valley.” Antonio shares his journey starting as a Wall Street Goldman Sachs Strat and witnessing the market crash, pursuing and enduring the trials and tribulations of startup life (complete with hefty legal and fundraising battles), negotiating a tricky twin Twitter acquisition deal that alienated his co-founders, landing as an esteemed Product Manager at Facebook during its heady crazy pre-IPO days, seeing his hard work in Ads come to a crushing, brutal end … only to be hired at Twitter. Trade secrets of tech giants, back-door deals, SV culture, personal hijinx — all this and, believe it or not, much more.

The reality of running a startup

We pretend that the world of startups is a great, innovative “hippie-fest” of makers, but in reality, it’s no different than any other full contact industry or politics.  Antonio likes to sail and draws the metaphor of when you’re out there in the ocean sailing, nature isn’t cruel or evil or against you, it’s just indifferent. It’s the same thing with the market. You can navigate it safely if you know its laws.

Antonio shares stories about his first job at a company called Adchemy. It was a stifling environment in many ways, under the mediocre leadership of a CEO named Mirthy. Upon Antonio’s departure to Y Combinator, Mirthy humiliated him for this choice, filed a lawsuit against him and even threatened his non-US national co-founder with reporting him to Immigration and Customs Enforcement. This cumulative experience informed Antonio when he started his own company—namely that companies sue each other all the time, but it’s important not to pollute the rest of the team with the legal, MNA fundraising aspects, but rather to let them focus on the product.

Antonio built the product and people were interested in it, including VC’s. The product was built on Google. At this time, everyone was focused on chasing the dream of the “SNB” side of Google AdWords, but everyone failed. Even Antonio’s pursuit was unsuccessful. But he was still funded and later accepted into Y Combinator, without having a finished product. Jason reminds us that when running an incubator, the overwhelming number of companies at that stage fail.

On leading a team, Antonio reads an excerpt from his book about life as a Product Manager at Facebook, and he compares it to being a mini cult leader or a third world dictator, and having to woo and rally your engineers to believe in you and your vision. “As PM, if you can convince your engineers to build the things you stipulate, then you are golden. But if you can’t, then you are like the dictator that has lost control of his army.” A particularly good moment was when Antonio highlights the IPO at Facebook.

Jason strongly believes that this book will make a great movie, because of Antonio’s candid delivery of Silicon Valley, but beyond that, he divulges his personal life and the disasters around that—his dating life, children, and his mother’s death.

09:26-16:50: Jason asks Antonio to talk about how and why he made the jump to Silicon Valley, based on getting a job with Adchemy—Antonio savages this company in the book.

22:31-26:19: Antonio walks us through building the product through Google, the interest from VC’s, and the fundraising process.

26:20-27:00: Jason shares his insight about running an incubator, but what you have to deal with is the majority of the companies at that stage fail

27:25-32:29: Antonio talks about a lawsuit from Mirthy for the writing of his book, and explains the philosophy of shielding that from the rest of the team.

36:10-41:30: Antonio gets the lawsuit, goes to talk to Paul Graham, well-known writer and thinker, who threatens to ban two of major the VC companies from Demo Day unless they deal with the lawsuit.

47:10-49:00: Fast forward a few months, Antonio gets a product done and tracks his process through a blog post, which leads to a lunch meeting with Jessica Verrilli, the Corp Dev for Twitter.

50:00-50:37: Jason expresses his thoughts on how he believes radical candidness is more endearing long-term.

57:50-01:04: Antonio talks about the transition into becoming a PM at Facebook, while the rest of the company joins Twitter.