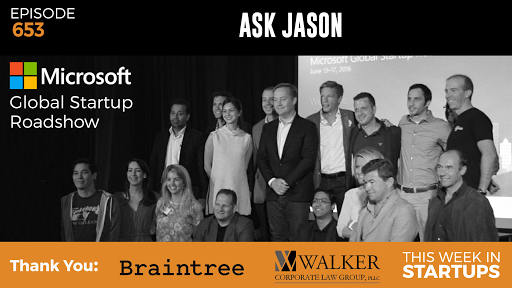 Braintree. 67% of online shopping carts are left abandoned, so there’s a good chance that your checkout might be letting some customers slip by. To learn more about how Braintree can help with the checkout experience, visit braintreepayments.com/twist.

Episode 653 of This Week in Startups is a special “Ask Jason” session filmed live at the Microsoft Reactor in front of an audience of up-and-coming entrepreneurs as a part of the Microsoft Global Startup Roadshow. From London, to Tel Aviv, to Beijing, founders from all over the world converge at Microsoft for this intimate Q&A session with Jason. One by one, Jason candidly answers questions on fundraising, mentorship & achieving product market fit as well as giving feedback on product pitches.

“What are the two to three mistakes you consistently see CEOs of startups make as they try to raise money?”

David Somers, CEO of RallyTeam, an app that connects projects and teams within an enterprise organization, wanted to know what not to do as a CEO when raising funds. Jason explains the importance of knowing which type of leader you are. Are you an introvert or an extrovert? Are you more laid back or are you a shark? Too many CEOs try to be sharks when that style of leadership simply doesn’t fit their profile. Then, Jason segues to the next question that David has on how to seek advice as a CEO. His best advice: “I have had to learn in my career, at times, when to stop talking and just listen… and listen, and listen some more.”

A demo of iBot’s hardware platform

CEO Ravi Subramanyam pitches his company’s (iBot Controls) product, a smart IoT system for home appliances. Jason loves the idea but doesn’t love the pitch. He shares the reasons that he believes founders often have difficulty pitching their own product. Due to being so far “in the weeds,” as it were, it’s difficult for founders to sum up exactly what their product is in a fluid and meaningful way. However, that being said, the product itself is an easy sell to investors as long as Ravi can tweak the pitch a bit.

Daniel Schichman demos his sports data-driven video creation system, WSC Sports, to Jason. The system is a simple step-by-step generator that automatically narrows the data to collect clips and assemble videos based on the selections that the user makes. The company is mid-launch at the moment but has it’s sights set on a direct-to-consumer strategy to make the software available for anyone to use in addition to partnering with ESPN and other such conglomerates. Jason’s only real gripe with the company is the name…

“What is your opinion of China’s B2C market?”

Jason points out that while China is not a democracy it has, over the last couple of decades, embraced a capitalistic economy. He commends the Chinese government for making their economic environment so friendly to entrepreneurship, which has allowed for the rise of some of the world’s biggest and most important tech companies. He also makes some important points on why it is still very difficult for American companies to partner with Chinese companies, for instance, Google and Facebook choosing to not even try to operate in the Chinese market. That being said, Jason explains that he is very much in accord with the idea of engagement with Chinese economics.

Where to put an enterprise sales team when looking to expand in the U.S.

Nick Heys of Azalead, a B2B marketing company based out of France, wants to know if it is better to base a sales team out of San Francisco or New York. Jason explains that through chat and communication apps such as Skype and Slack, it has never been easier than it is now to operate remotely, especially for a sales team. However, there are some real advantages to having boots on the ground in both New York and San Francisco. The talent is better in the Bay Area, but there is less competition for talent in NYC. Fundraising is far easier in The Bay than it is in New York, but the rent is much higher. So, the point that Jason is trying to make is that it depends on what your goal is, and where you feel you can best achieve that goal.

0:45-1:19: Scott Coleman of the Microsoft Accelerator introduces Jason and the special TWiST session.

4:54-12:41: David from Rallyteam asks, “What are the two to three mistakes you consistently see CEO’s of startups make?”

14:31-20:32: Ravi Subramanyam pitches his appliance error-detecting platform, iBot Controls. Jason loves the product but gives some advice on the pitch.

22:05-26:33: Alister Esam from eShare asks Jason, “What single most important factor do you see in startups that indicate that they’ll be successful?”

37:00-44:01: Georgina’s question is in relation to a piece of advice she received from another VC on being cautious about expanding internationally.

47:40-49:58: Jason loves Daniel’s product and explains why he thinks it is such an easily monetizable idea.

49:58-52:20: Jason really reiterates his point on why Daniel needs to change the name of his company to something more memorable.

57:18-1:05:31: Jason explains why it is so important for the U.S. to be economically engaged with China and other important nations that may not share our same political views.