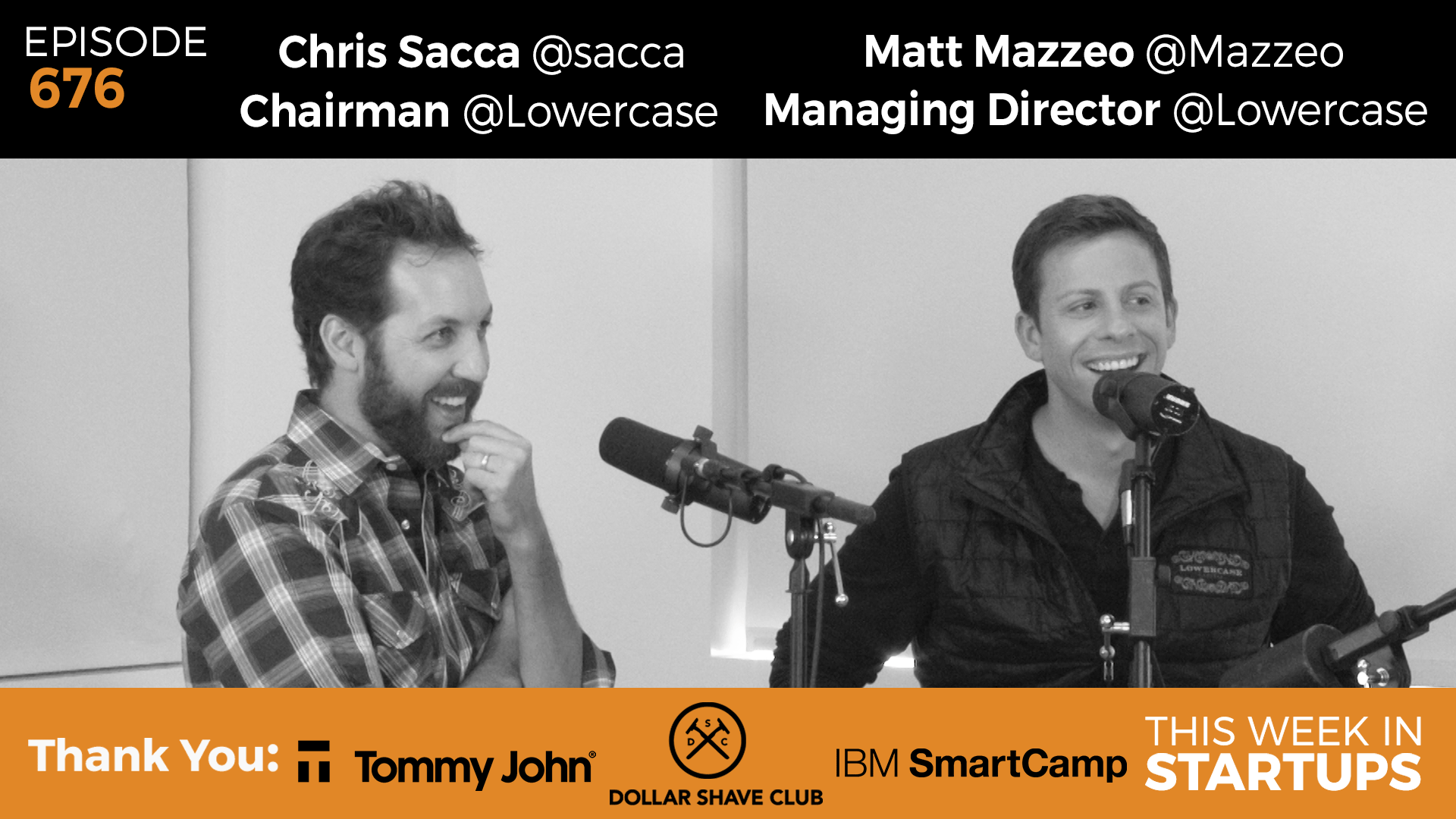 Chris Sacca & Matt Mazzeo of Lowercase Capital join Jason in L.A. for a rollicking two-parter. In between the ribbing, Part 1 finds the three catching up on the universal principles of building companies, what Chris & Matt can bring to the table, why Twitter isn’t growing & its best buyer prospects, why Snapchat is genius but hard (for Chris & Jason but not Matt, the native swiper), the lost art of storytelling in product development, investing with integrity, Chris’s tips for avoiding meetings — and much more. (Stay tuned for Part 2 next week!)

00:54 Welcome to Chris Sacca & Matt Mazzeo of Lowercase Capital
01:57 Jason asks: Is being an investor easy or hard? It’s both. Chris and Matt break it down. (Including a spirited debate on the value of meetings.) They have different but complementary approaches to making and cultivating relationships with entrepreneurs.
07:16 Chris says, we don’t forward to investor colleagues anything we’ve passed on. Leads to reasons for passing on products.
08:54 Example of passing on Snapchat. (At the time it was a different product.) One moment drove home to Chris that the meeting is not his strong suit – he’s not the initial user of a product but Matt is.
10:20 Matt talks about recent investments in e-sports: Smash.gg & Mobcrush.
11:44 Chris talks about the specific values Lowercase Capital brings to the table for entrepreneurs. Chris and Matt are a complementary team.
14:07 Partner break – thank you Tommy John.
16:21 Welcome back. Jason brings up Chris’s successful investments. Twitter, Uber, Instagram, Twilio & more.
17:49 Twitter was a life-changing event. Original valuation $20m, which at the time was absurd. Goes into history: they thought it was a fun product, and everyone believed in Evan Williams. Compares valuations of Uber & Twilio, much lower. We’ve made bank on smaller companies.
19:49 Jason: what’s your ownership request these days? Chris says being obsessed with it is a blocker to success. Matt: we write small checks and then lean in when they start hitting their marks.
21:21 We have rules that aren’t about check-size. #1: we need to be proud of the investment and its impact, and that we can personally move the needle.
22:56 Jason asks: where can you make biggest impact? Matt: helping companies tell stories. Chris wholeheartedly agrees and launches into history of web 1.0 when slick storytellers ruled but were replaced in 2.0 with the coders. Progress, but storytelling got lost.
27:55 Spirited debate of how hard Snapchat is — and why it’s harder for Chris and Jason but not for Matt, who is a native swiper. Generational divide.
30:18 Twitter. Chris deconstructs exactly what is wrong with Twitter, why they have such a growth problem. The product is too hard to use.
36:15 Partner break – thank you, Dollar Shave Club.
38:50 Discussion on Jack, Adam, Evan; roles and frustrations around Twitter senior leadership.
43:22 Who is the natural buyer of Twitter? Chris lists them one by one. (Google? Facebook? Microsoft?)
47:45 Evan Williams as the philosopher king of the internet. Chris calls him long-form.
50:55 In contrast Trump is a good tweeter but has no substance. The public confuses money with wisdom. But Trump is not the businessman he claims.
52:36 Jason asks Chris, would you rather have: Google or Facebook buy Twitter at double the current price OR they buy Medium, and Evan comes into Twitter and grows it from here?
56:51 Thank you, IBM Smartcamp
END OF PART 1