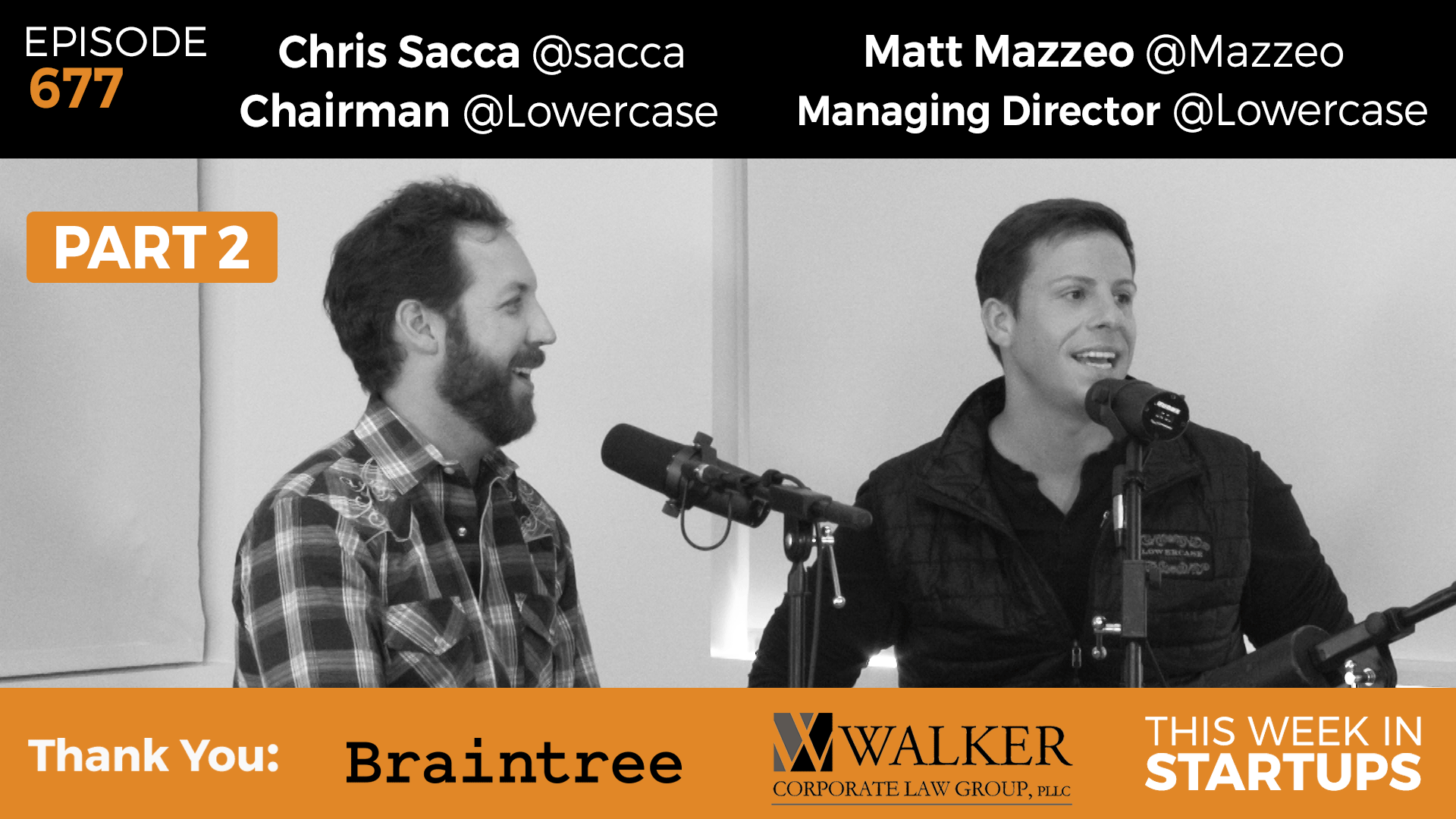 If you’re a business owner, eventually you’ll face chargebacks.
To learn more about how Braintree can help you resolve chargebacks, visit braintreepayments.com/twist.

Scott Walker at Walker Corporate Law. Scott loves startups and shows it, with fixed-fee pricing. Have a question? Email him directly, scott@walkercorporatelaw.com and tell him Jason sent you.

It’s Part 2 of Chris Sacca and Matt Mazzeo of Lowercase Capital. In this hour, the conversation turns to the patriotic duty of voting, Chris’s experience on “Shark Tank” & the illustration of social mobility, the tremendous eSports market, drug testing, new products at Lowercase Alpha & the power of SMS, the great responsibility of being a VC and spending other people’s money, Chris’s favorite portfolio company,Tala.co, which extends credit in emerging markets, investing in diversity, raising daughters in the princess industrial complex, and more.

Timestamps
00:38 Welcome back (it’s Part 2!).
01:12 Chris asks audience to register to vote. VOTE.ORG Says it’s your patriotic duty. Discussion on voting rights, rules, challenges, responsibilities, fraud.
05:21 eSports discussion. Matt is very enthusiastic & explains the appeal in-depth. Big crowds, high energy & intensity, great business opportunity.
13:33 Partner break, thank you Braintree!
15:58 Continued eSports discussion. Matt invests his own money into eSports teams, after the fund his largest investment(s). (One of them is immortals.gg) Is there drug testing in eSports?? Chris thinks it’s the all-drugs game and possibly a dangerous sport for young people.
20:59 Partner break, thank you Scott Ed Walker!
22:42 Jason asks, what’s going on with Theranos? Chris: I only invest in things I can personally help so we pass on a lot of healthcare startups because of regulatory issues. Expensive & risky.
24:21 Rothenburg Ventures. Thoughts on that? Segue into risks/privilege associated with being a VC and spending other people’s money. You have to take the fiduciary responsibility very seriously. Chris mentions other people’s skepticism when he put a ton of early money into Uber, but he just knew that it would be huge.
27:14 Lowercase Alpha. Matt explains: it’s their project helping entrepreneurs get real feedback on their products before launch. Users are sent links to beta projects via text and they reply with opinion. Great way to combine their skills, brand, resources to help founders.
30:35 Reply Yes is one of their text-based companies. SMS has 100% open rate.
35:07 Jason asks Chris about his time on “Shark Tank.” Chris says it was a very positive experience and the show is very authentic. Explains how he was approached to be on the show, how it represents the hope of social mobility & that path is still there.
41:21 Jason asks about Chris’s “Shark Tank” investments. How did that work? Chris ran them by Matt and they decided together. For example, Brightwheel, connecting parents to kids through the day.
45:35 Speaking of fitness, there was a weight bet about who could lose most body fat. Matt won it.
47:50 Brian Sacca! Chris talks about his brother’s acting career and being on “The Wolf of Wall Street” and his new TV show, “Wrecked.”
51:55 Chris talks about Tala.co, his favorite company and the only one he’s on the board of. Explains why he is so excited about it. They extend credit in emerging markets and are amazing, with incredible success in Africa, Asia, and Middle East. Discussion of investing in diversity and why it’s so important. Tala & its founder, Shivani Siroya, outperform all other portfolio companies and has the most gender & racial diversity. Not a coincidence.
01:02.54 Both Jason & Chris are the fathers of 3 daughters. How has that changed you? Chris says it helps him prioritize, family means everything, & talks about the dangers of the princess industrial complex & how it affects girls. Need to counter that and reverse gender inequality.
01:09.13 Chris thinks parents are the most effective workers. Example of Susan Wojicki, when she was at Google. (She is CEO of YouTube now.) Matt brings up the fact that both Chris and Jason have great partners.
01:10.58 They keep trying to end the show (the next guest is waiting in the wings); he’s a book author. Chris says I’ll never write a book; Jason is writing one now. They argue about pros/cons of immortalizing your own words.
01:16.16 END OF SHOW.