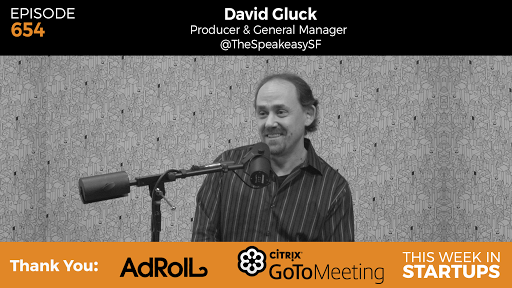 Immersive theater has been around for some time now, but “The Speakeasy” is turning heads — since JOBS Act Title III took effect, it’s the 1st crowdfunding theater project in the U.S. to offer equity. Jason sits down with David Gluck, the producer and general manager of the interactive 1920’s-themed theater experience “The Speakeasy,” to find out the process, pros and cons, and progress involved in the quest to opening day. Check out the show’s Wefunder campaign here: https://wefunder.com/the.speakeasy.

What is immersive theater?

Immersive theater is basically a live dramatized production without a stage or seats. The actors and the viewers sit, stand, and interact together in the same space. Without any division from the audience the experience is highly interactive and improvisational. There have been a number of extremely successful immersive theater environments, such as Tony ‘n Tina’s Wedding, and even a Star Wars themed production where you can walk through the Millennium Falcon. The Speakeasy itself is a 1920’s-themed environment complete with a multi-room bar and a load of actors mixed in among the crowd.

How does investing traditionally work in the theater business?

Traditionally, in a Broadway sort of theater production the net profit is typically split 50-50 between the producers and investors. Not one penny goes to the producers or actors until the investors get their initial return. In the live entertainment business there are rarely opportunities to make money, so when an investor sees a good opportunity they jump on it. What David is doing with his immersive theater business is now picking up steam, and he is looking to raise $1.5 million to turn make his vision come to life.

The first round of financing

In 2014, equity crowdfunding did not exist. At that time, the initial raise for his first project was through a process called private placement. They did do a kickstarter but they only raised $5,000 through that medium. Their goal at the time of the initial round was to raise $200,000 from investors for a $250,000 budget. They sadly were only able to raise about $60,000 total. However, they did manage to get the show up and running through a variety of scrappy means. The show went on to be a massive success running 75 sold out shows over a five month duration.

Title III of the Jobs Act

The brand new legislation, having gone into effect on May 16 of this year, has had a massive impact on the way small businesses are allowed to garner funding. It is too new to really see how important this legislation is going to be to the world of startups, but for “The Speakeasy” it has made all the difference. Essentially, previous to the passing of Title III, there were very strict rules as to who could make bets on early stage companies. But now, the new law allows any non-accredited investor the ability to invest in startups through any legitimate crowdfunding platform such as WeFunder or CircleUp.

Jason brings up an interesting point, in that, he wonders if the number of sub-par companies who have to resort to this sort of financing after being turned down by more legitimate and knowledgeable investors will elicit low expectations for companies who choose such a route. David admits that it is a little bit of a concern to be lumped into the same bucket as other companies who, essentially, couldn’t hack it in the formal investment world. But he feels confident at the same time, that the quality companies who take the crowdfunding route will command respect as pioneers.

1:12-1:55: Jason introduces the topic of the episode: immersive theater and equity crowdfunding.

1:55-6:48: Jason introduces his guest, David Gluck, who then gives a little background on “the hottest wave in theater.”

6:48-13:45: The two get into the non-traditional funding that David has chosen to try out this time around.

17:10-23:38: Jason asks about the types of investors that these immersive theater projects attract, as well as the details of “The Speakeasy” specifically.

23:38-26:06: David plays The Speakeasy’s WeFunder video to give a visual example of what the experience looks like.

26:06-31:50: They get into the details of the SEC’s new Title III section of the JOBS Act, as well as what it takes to raise money through equity crowdfunding sites like WeFunder.

34:30-36:43: Jason asks about the actors involved in the production, as well as the difficulties of making your way as an actor in a city as expensive as San Francisco.

36:43-40:59: The conversation turns to the dismal housing and transportation situation in the Bay Area.

40:59-42:24: David goes on to explain how he’s already raised a Series A, and is choosing to raise the rest through equity crowdfunding.

42:24-48:57: David shares the fact that the crowdfunding campaign is not going quite the way he was expecting.

48:57-52:25: Is it more difficult to brand yourself as a legitimate company through this unorthodox source of funding.

58:37-1:14:46: Bonus! Ludo Ulrich from Salesforce joins Jason to explain the mission and reach of Salesforce for Startups.