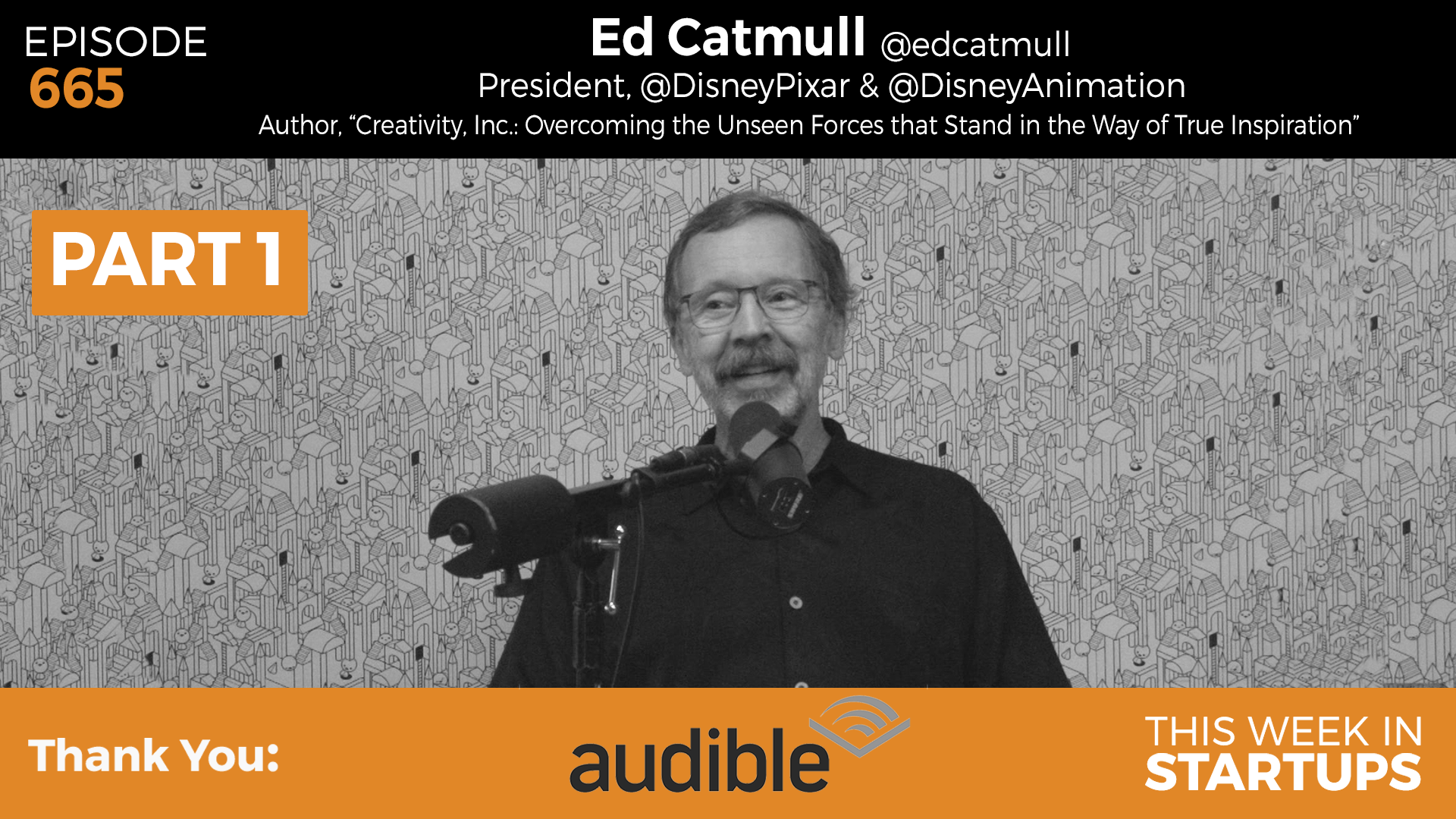 Audible, the leading provider of audiobooks with over 180,000 titles. Get your free audiobook at audible.com/twist. Jason’s pick of the week is Creativity, Inc.: Overcoming the Unseen Forces That Stand in the Way of True Inspiration. Written by: Ed Catmull, Amy Wallace. Narrated by: Peter Altschuler.

Pixar-Disney Co-founder & President Ed Catmull, and author of “Creativity, Inc.: Overcoming the Unseen Forces That Stand in the Way of True Inspiration,” is one of the greatest startup founders in the history of Silicon Valley. Today he joins Jason on This Week in Startups to share his own personal story, perhaps the best that has come out of Pixar. We learn about Ed’s journey from his early days as a pioneer of computer animation, being hired by George Lucas to run the computer division at Lucasfilm, working with Steve Jobs to form Pixar (ultimately Pixar-Disney) and leading it to meteoric success and, over time, developing creative & sustainable management philosophies to share with the world. This is only the first of two parts, so stay tuned for much more.

To download “Creativity, Inc.: Overcoming the Unseen Forces That Stand in the Way of True Inspiration”: audible.com/twist

The early days of computer and art

Ed grew up on Walt Disney, and was fascinated by Disney’s animation techniques. His dream was to be an animator, but when he went from high school to college, he realized that he didn’t know how to get to the next level. There was no training ground for him to measure himself against where the professional animators were, so he switched his focus to physics. During this time, Ed was exposed to computers and started to learn about animation at the University of Utah. He explains the complex infrastructure of having to work out the technology, solve problems, find the right colleagues and train them, and also wait for computers to get faster. And so, Ed and his colleagues were making a lot of decisions on where they thought things were going to be, because they didn’t have the computing power to support what they wanted to do at the time.

Failure made Steve Jobs better, wiser and kinder. After the blowup with Apple CEO, John Sculley, Steve was forced out. This led him to embarking on a classic hero’s journey, pursuing NeXT and Pixar, making mistakes but learning from them, and ultimately altering his behavior and becoming more empathetic self-aware. He understood that he had to be a good partner. Upon his return to Apple, everyone who saw this change in Steve stayed with him for the rest of his life. It was that changed Steve, the one that got through that journey and learned those lessons, that created the highest value company in the world.  It’s very important, especially for entrepreneurs, to understand and embrace change.

Ed and his team endured a lot of hardships, but everybody stayed together and remained loyal, so when the opportunity to make their first film, everyone already had each other’s backs and trusted each other. What frequently happens in startups and Silicon Valley is that a group comes together, and if it doesn’t work out, they’ve all learned something, but they disperse. In Ed’s case, the learnings stayed in the group. With that knowledge and the trust, they were in a good position when they had the task of making the first animated film.

In our lives, we can remember seasons changing, and evolving from an adolescent to an adult. Good films appeal to those feelings and bring all of those elements together subtly, so that it’s connecting with the audience, while entertaining and informing them. If you strike that balance, it’s almost like you don’t know it happened and you come out of the theater feeling satisfied, because you don’t see or expect it. Toy Story is about the new and the old, and there are subtle representations of what you see in life. Ed and his team had the ‘old’ way of doing things, and then along came the computer. In the case of the movie, Woody represents the ‘old’ and Buzz Lightyear represents the ‘new’.

00:20-09:17: Jason introduces his guest, Ed Catmull, and starts off by asking him about his early inspirations of being an animator.

09:38-11:28: Ed shares an early model he made of his hand and explains how he wrote the programming language to make it move.

17:51-22:51: Ed explains why he thinks Star Wars is the single most impactful film in the history of the motion pictures industry.

35:02-36:06: Despite the difficult times of failure at Pixar, Ed recounts how everyone stayed together and became a cohesive group of people who shared hard times, trusted each other, and had each others’ backs.

40:00-41:35: Jason and Ed talk about the history of Ed’s short films, and how Luxo was the transformational piece.

50:51-53:20: After the release of Toy Story, Ed found that reviews were mostly about the story, and not about computer graphics. Pixar goes public.