Deprecated: File Theme without header.php is deprecated since version 3.0.0 with no alternative available. Please include a header.php template in your theme. in /home/thiswee/public_html/wp-includes/functions.php on line 5579
 E666: PT2-Ed Catmull, President Pixar-Disney & author “Creativity, Inc.” on Disney merge, the art of good filmmaking, building creative culture through radical support, risk-taking to triumph & failure, & storytelling struggles that led to timeless classics | This Week In Startups 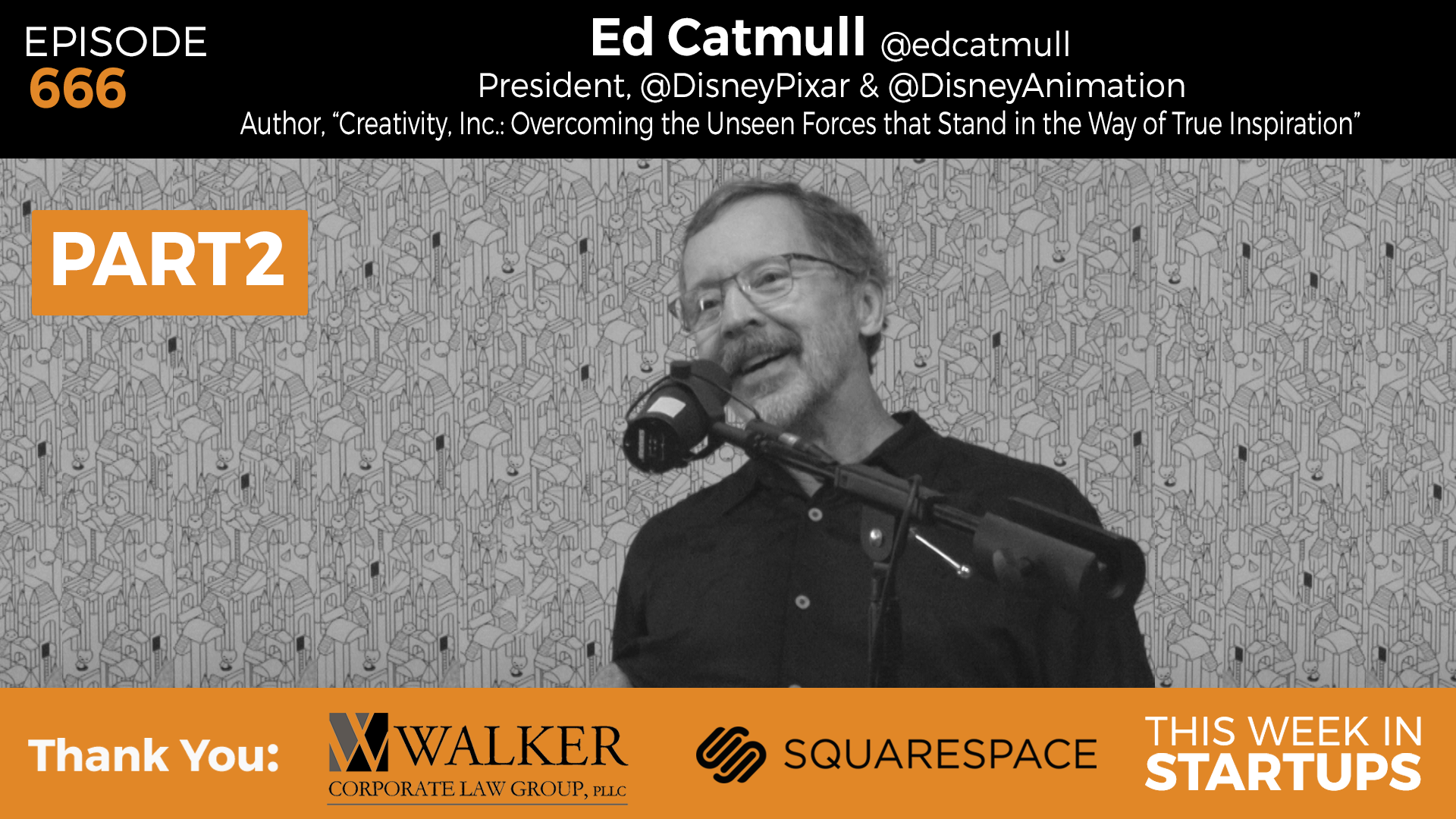 Pixar-Disney Co-founder & President, Ed Catmull, and author of “Creativity, Inc.: Overcoming the Unseen Forces That Stand in the Way of True Inspiration,” is one of the greatest startup founders in the history of Silicon Valley. In this Part 2 episode, his conversation with Jason on This Week in Startups continues as he talks about his existential crisis after Toy Story’s explosive success, the unique struggles for each Pixar film, and building a creative culture at Pixar and Disney. His story is one of dogged resilience, filled with risks, mistakes and lessons learned, and it will inspire entrepreneurs and non-entrepreneurs alike.

Asking yourself: “How much of this is me?”

After the success of Toy Story, Ed asked himself, “How much of this is me?” only to realize that it was a meaningless question that takes you down wrong path. Ed has observed people that have asked that of themselves, but they came up with the wrong answer because they wanted to prove that they did it. You genuinely have to appreciate the links in the chain, while acknowledging the fact that you can’t see all of the links that actually affected you.

Failure & how to reflect on it

How do you keep a team from falling apart? How do you make a culture sustainable, and what gets in the way? Having watched a lot of companies succeed and fall apart, Ed makes an effort to be self-reflective. He acknowledges that each movie is a risk, and that no one wants to be the first person to make a mistake. However, if you don’t try something new, you won’t be successful.

How to build a culture of radical support

Like complex riddles, all of Pixar’s films were hard to figure out, and factoring in all of the emotions that are involved, Ed stresses the importance of supporting people during low times, even though there is no guarantee of what you will get in return. A structure was built to preserve a radical openness amongst everyone.  Ed explains that in certain rooms, you have to remove the power structure to make it safe for people to be candid, and for the leader of the project to listen. This was applied to the entire company, which was an iterative and introspective process, which enabled Pixar to continue creating fresh content, and re-inventing the future.

Ed believes that things have to change, and you have to adapt to the realities of what you have now, which means continually adapting and learning. This is reflective both in the studio, and outside the studio, when Pixar sold to Disney. The studio merge was a major turning point in Ed’s career, and it took four years for values around failure and mistakes to get integrated into the new culture, but he reminded himself that he will learn something from this process.

The art of good filmmaking

Pixar’s fundamental approach is to simply make everything good. They make sure to do their research to, whether it’s flying to Paris and dining at Michelin-starred restaurants, or holding a magnifying glass up to bugs. This creates a feeling of authenticity in their films. What’s special about Toy Story is its ability to relate to the human condition—if you could live forever, but you were without love, would you pick that over having love and people in your life, knowing that you were going to die? What makes good filmmaking is when the audience feels connected to the characters, and in Toy Story’s case, feel the existential threat that Woody felt.

13:30-14:52: Jason talks about why Ratatouille is his favorite Pixar film and asks Ed about the origin of the Anton Ego speech.

14:53-18:36: Brad Bird’s influence in Ratatouille, and why they had to fight to get The Incredibles made.

18:37-20:08: Ed explains the research that goes into their films in order to achieve the feeling of authenticity.

37:56-43:08: Ed describes the merging with Disney, how they removed the barriers, and the challenges of keeping a culture safe.

43:39-46:02: The two discuss the human condition in Toy Story, and what makes good filmmaking.

57:32-58:20: Lucasfilm and Disney/Pixar are different entities and have different working models, but the teams all still communicate with each other.