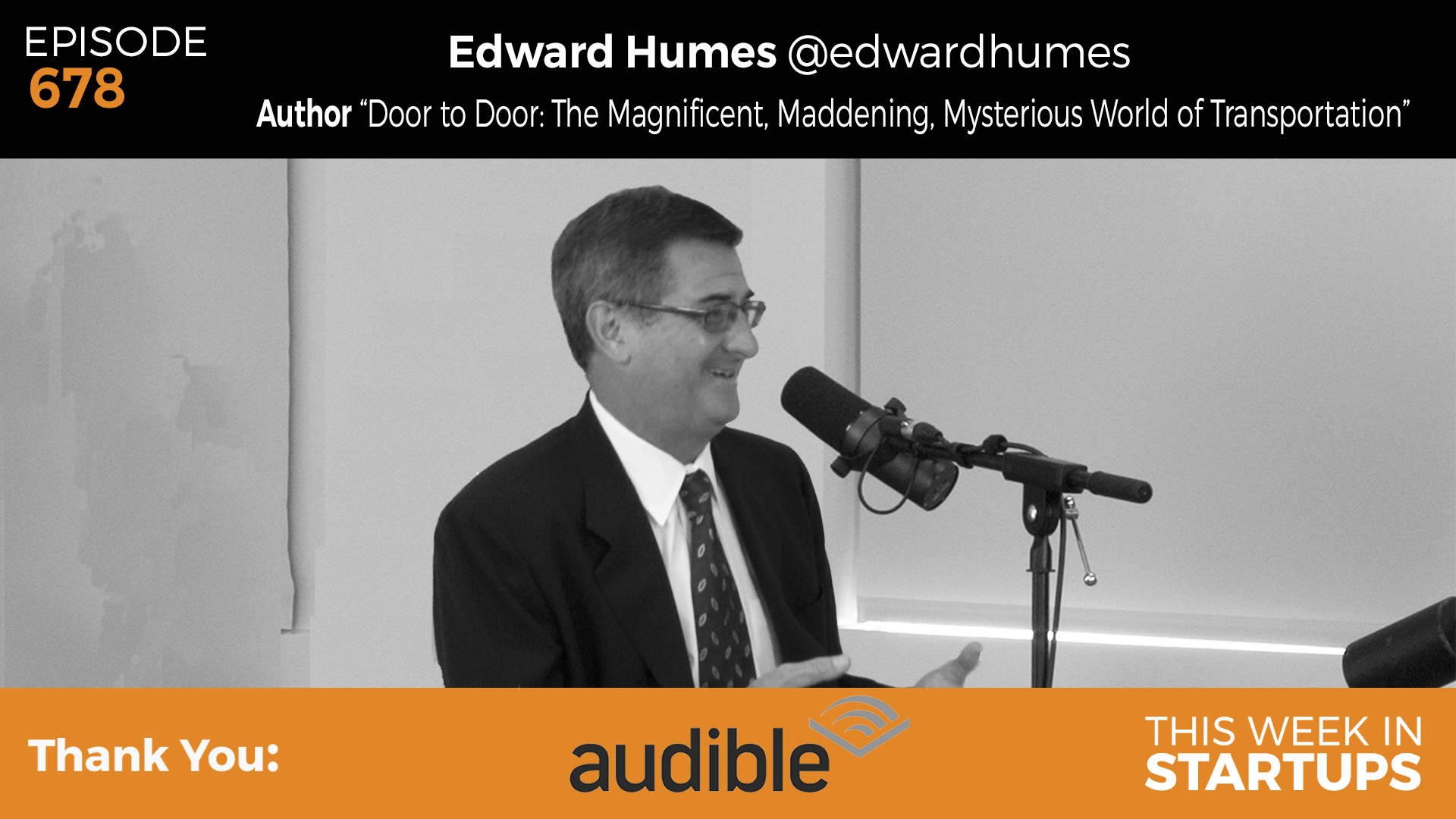 Audible, the leading provider of audiobooks with over 180,000 titles. Get your free audiobook at audible.com/twist.
Jason’s pick of the week is A Guide to the Good Life: The Ancient Art of Stoic Joy, William B. Irvine (Author), James Patrick Cronin (Narrator)

Pulitzer-Prize winning journalist Edward Humes joins Jason to discuss one of humankind’s greatest innovations and persistent problems: transportation. The two talk about Edward’s latest book, “Door to Door: The Magnificent, Maddening, Mysterious World of Transportation,” the technology behind the “have it now” economy, industry’s revolution in the form of containerization (& its hidden costs, e.g. carbon emissions), the transportation juggernaut that is Dominoes Pizza, how to bully the Google car, security on planes & cargo ships, the future of autonomous cars & drones, best options for sustainable fuel, China as our greatest frenemy, and much more. Join us!

00:28 Welcome to the show. Jason loves to meet authors who are thinking about big issues startups are tackling. One of the biggest: transportation. Welcome to Edward Humes, writer of “Door to Door: The Magnificent, Maddening, Mysterious World of Transportation.”

01:25 What inspired you to write the book? Food for Ed’s diabetic cat was delivered so fast he wanted to examine what it takes to keep us moving in this “have it now” economy.

03:10 Who was the driver of this revolution? The shipping container which changed the world, and made global trade possible. Fast, secure fraction of labor. (System before hadn’t changed since the Greeks.) 90% of the world’s goods come to us by shipping container.

07:10 Relationship with China has changed as a result. The idea of real conflict between us is so remote because our economic ties are so tight. Good or bad thing? A mixed bag.

08:44 Elon said recently it doesn’t make sense to ship stuff to China, and we have to make everything here. Steve Jobs had said overseas manufacturing jobs weren’t coming back and we don’t want them because they’re so low paying. Economics of manufacturing get better and better but without high-paying jobs.

11:08 Who is good at positioning its goods in distribution centers? Amazon. Also Dominoes, which is a powerhouse transportation company. 100,000 bowls of fresh dough packed into containers and shipped to franchises per day.

14:43 This is “affordable” because there are many hidden costs. Carbon. If the cargo fleet was a country it would be the 4th largest green house gas emitter in the world, more than the 4th largest economy, Germany. Also, in international waters, so nobody counts it.

20:42 Welcome back to Ed Humes. EdwardsHumes.com. Wrote “Door to Door” & “Garbology: Our Dirty Love Affair with Trash.” Another story of consumerism driving the earth to a very dark place.

22:13 Are you optimistic or pessimistic about the future of humanity? Ed’s answer: cautiously optimistic. Transportation is insane but also a towering achievement. But currently unsustainable. Example of Amazon. You order one thing at a time. It adds up to a lot of traffic and packaging.

28:08 What do we do now? How do we be less wasteful now? Some practices. Even Walmart looked at their trucks, put in in auxiliary generators so trucks not idling and wasting gas, and also shrunk packaging. Making us less bad, but not good exactly.

30:51: Ed is optimistic about automatic vehicles and shared networks: would solve nearly all the current problems with transportation (parking, accidents, etc.).

33:48 How soon before we see the impact of self-driving cars? Discussion of how far technology has come, and which companies are innovating. Human resistance continues to be a blocker.

38:18 What year will majority of rides be autonomous in a major city? Edward says Singapore within 5 years. Lyft is trying to distinguish itself from Uber by being a supporter of public transportation and solving that last-mile problem.

40:20 What about drones? Amazon, Google, others are experimenting; and some startups are building R2D2-like units on the ground to put food/goods into, etc. Ed’s dubious of little drones model because of volume, privacy, and safety — and the FAA. You’ll always need a human. The big play for drones is cargo, not consumer.

46:58 Did Tesla launch their auto-pilot too early or are people not following instructions? Edward thinks the latter. It’s hard to maintain vigilance when we’re bored. Jason finds it useful and he’s less fatigued. Discuss dangers of distracted driving. Most of safety features historically have been surviving crashes. Now it’s going into avoiding them.

54:22 Ed covered a major airplane crash when he was a young reporter. As a result, safety and anti-collision technology was put into every plane in the world. But epic amounts of people have been killed on the road for decades and we’re resistant to chances. Tips for bullying the Google car.

57:18 Discussion about Hyperloop, is it feasible? What impact do you think if it works? In theory: it would be revolutionary. Certainly could be a great cargo solution. Not so sure about humans under the ocean in a high-pressure environment.

01:02.54 Did we ever solve security in our ports? Disaster scenarios.

01:03.45 Who is going to win the transportation company wars? Logistics is the new manufacturing, that’s where the jobs are. How about amazon, will they just take over? Probably still more driven by market share than profitability.