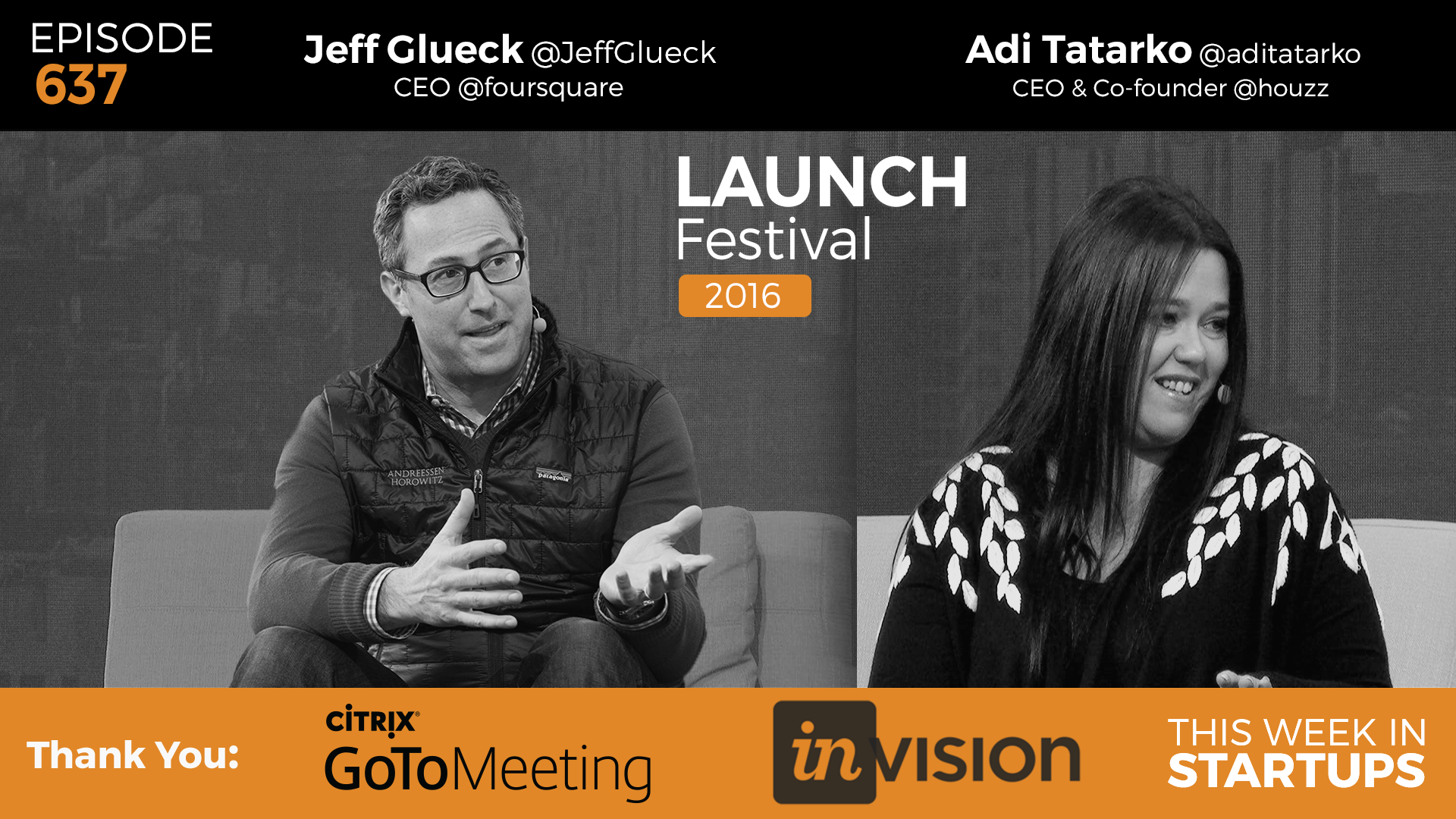 Have you ever wondered what it takes to build a truly scalable business from the ground up? Filmed on the LAUNCH Stage at the 2016 LAUNCH Festival, episode 637 of This Week in Startups features two very successful entrepreneurs who share some insights into how they have managed to scale their global companies. First, Jeff Glueck, CEO of Foursquare, talks with Jason about splitting the product into two separate apps, bridging the digital & the physical, and using data to map the world. Then, Adi Tatarko, CEO of Houzz, gives an in-depth look at the company, where they started, and how they reached a monthly user base of over 35 million worldwide.

Jason inquires about the company’s decision to split… Foursquare on one side and Swarm on the other. Jeff admits that initially it was a bit confusing for users. However, by making this switch they have managed to personalize the experience for their two main types of users. Swarm is generally for the younger generation who enjoy the competition involved in the app, whereas Foursquare is more tailored toward the type of people who just want to find a great place to eat. By splitting the company Foursquare has managed to open up both markets to take advantage of two distinct user types.

Visualizing the Foursquare and Swarm community

Jeff gives some powerful visual representations of the user base with shapes. They are able to track exactly where users are “checking-in,” and plot data points in a three dimensional map. This data is constantly being updated in real time, which allows for almost instant knowledge of virtually every restaurant or shop in the world, when they’re popular, and what they’re popular for. This allows Foursquare to track the patterns of the entire world’s economy on an almost microscopic level.

“93% of consumer spending still happens NOT in e-commerce.” With the vast majority of economics still taking place in brick and mortar establishments, Foursquare seeks to create the most efficient bridge between the digital and physical worlds of consumer markets. By tracking the movements of users at real locations, whether it’s a restaurant or department store, Foursquare is closing the loop for merchants to see how effective their advertising is with unprecedented accuracy.

Understanding the right time to monetize

Jason asks Adi Tatarko how she knew when to monetize. Adi feels strongly about making sure that you have the right product first. At Houzz, they were able to get feedback from the professionals who were already on the platform and were ready to pay for a premium account to gain extra features on a local level. The other way they knew, is when people began to demand that Houzz offer a final pay feature that allows the user to purchase the items directly through the app. When your users demand monetization, that’s when you are ready to monetize.

“Not for every company,” Adi advises. Houzz’s expansion into other countries and languages happened organically. There are numerous examples of large and successful companies who have chosen not to go international because it just didn’t fit their mission, and there is nothing wrong with that. For Houzz, however, they found that 35% of their users were coming from outside the US. So there really wasn’t a decision to make, internationalizing was simply necessary to scale, and that necessity arose naturally.

1:07-4:17: Jason introduces the CEO of Foursquare, Jeff Glueck, and discusses the difference between their two apps: Foursquare and Swarm.

4:17-11:31: Jeff explains how “checking in” with Swarm helps map the world and create the shapes that make the app so useful.

14:51-17:35: How does Foursquare measure the effectiveness of mobile advertising?

25:42-27:38: Foursquare’s culture is very different from Yelp. The “tips” that Foursquare offers are more useful on mobile than full reviews.

27:38-31:12: Jeff explains how Foursquare was able to predict the sales of the iPhone 6s so accurately.

31:12-33:46: Jason introduces Adi Tatarko, who gives a brief summary about the origins of her company, Houzz.

43:27-48:47: Jason asks about the resources necessary to launch internationally.

50:33-53:47: Jason and Adi discuss why Houzz is not a threat to home & garden magazines, but actually an aid to their industry.

53:47-58:19: Jason inquires about the difficulties that Adi has faced as a female founder.