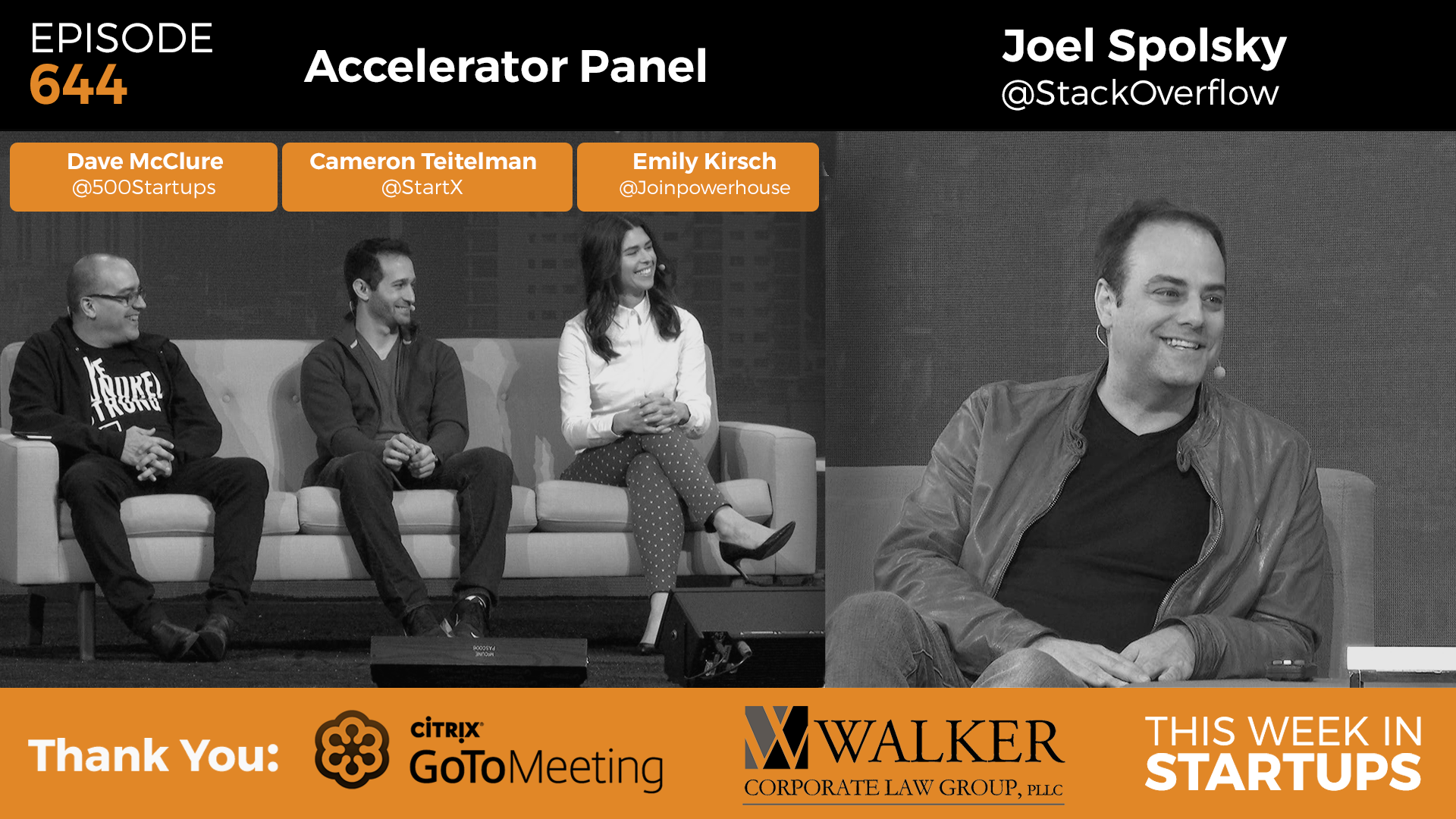 Accelerator programs have become an invaluable force in the world of startups. In episode 644 of This Week in Startups, Jason interviews a panel of accelerator thought leaders on the LAUNCH Stage at the 2016 LAUNCH Festival. Dave McClure of 500 Startups, Emily Kirsch of Powerhouse, and Cameron Teitelman of StartX convene to discuss the benefits of enrolling in an incubator, and the differences between the major accelerators available today. Then, Joel Spolsky sits down with Jason to talk about his massively successful Q&A website, Stack Overflow.

The differences between the accelerators on stage

Emily Kirsch’s Powerhouse is specifically geared toward solar companies. Based out of Oakland, they are leading the way in creating a healthy competitive environment for the leading sector in renewable energy. 500 Startups has pushed roughly 500 companies through their accelerator programs and another 1000 outside of that, placing them way out in front in terms of sheer volume. StartX, affiliated with Stanford University, primarily supports the alumni community, and has done over 200 investments in 260 companies over the last two years.

The rising bar for enrolling in incubators

For 500 Startups, almost all of the companies they accept already have a finished product and some degree of monthly revenue (usually $10-50K). About 30% of StartX’s companies are pre-revenue. What is most important to them is the raw potential within the team. Powerhouse obviously looks for companies in the solar energy space, but beyond that, they look for founders who have already felt the pains within the industry. They like founders who have worked for the big players like Solar City and experienced roadblocks within the corporation that led them to try it on their own.

Is there an ethical duty as a founder?

Powerhouse is taking on one of the greatest super villains in the history of big business… oil. By supporting and incubating companies who are competing to bring energy to the market that is healthy for the planet as well as the economy, there is arguably no cause more noble for a founder. StartX is a nonprofit accelerator and focuses on attracting entrepreneurs who deeply care about the problems they are trying to solve. They specifically avoid founders who care only about making money. Cameron believes that the reason Silicon Valley has been so successful is because companies have worked with each other and supported one another, rather than stabbing their competitors in the back.

“We’re really focused on questions that have an answer… All of our questions, there is an answer, and it’s either right or wrong… and that gets us very high quality content.” Joel explains that while most other Q&A sites have crashed and burned, Stack Overflow has been able to grow their user base at an exponential rate by creating an environment specifically for developers. With a system for upvoting and downvoting, users are able to sift through the content to pull the answers that they need, and know that they are receiving objectively the best solutions to their problems.

The imaginary conversation between you and the customer about the product

Jason asks Joel about the advice he would give himself if he could go back in time. “At every point imagine that you’re sitting on a rug in the marketplace in the middle of town and you’ve got one product in front of you and somebody is talking to you about that product.” The point, Joel explains, is that you should always be in that moment where nothing else matters but the customer’s concern about your product. This is the primary thing that Joel wishes he had focused on more as he began his entrepreneurial career.

1:36-2:32: Jason introduces the distinguished members of the accelerator panel.

2:32-3:50: Jason asks Dave how many companies have gone through one of the 500 Startups programs, and how many investments they’ve made.

5:54-6:34: Emily explains Powerhouse, and why they chose to focus exclusively on solar energy companies.

6:34-15:11: The panel discusses the benchmarks and expectations that accelerators have for the companies they accept.

15:11-18:00: Jason asks Dave about his thoughts on housing the companies together, in contrast to Y Combinator, which keeps its companies separated to increase productivity.

18:00-21:40: The panel discusses the funding environment, particularly for the solar industry, and how the low oil prices are affecting venture capital in solar.

21:40-23:54: Given the cost of living and the price of talent, is it sustainable to start a business in Silicon Valley, and are there geographic alternatives?

25:29-28:53: The group shares the implications of rule-bending and aggressiveness as investors pressure entrepreneurs to move faster than they should.

28:53-32:23: Emily explains the importance of fighting big oil to transform the energy sector into a sustainable system.

34:29-36:31: Each of the panelists share their single best piece of advice for first time entrepreneurs.

38:00-42:05: Joel explains why his Q&A website has succeeded while so many others have failed.

42:05-45:20: Joel discusses his decision to take on venture funding with Stack Overflow, when he always was skeptical of it in his past businesses.

50:34-53:09: The system of liquidity for startups seems to be flawed. The two agree that the equity options to the employees should probably be a little more generous.

53:09-54:46: The two discuss why it’s nonsensical for employers to require their developers to have a bachelor’s degree in computer science.

54:46-58:17: Joel used to believe that remote work was inefficient, but he has since changed his stance on that, citing the benefits to recruiting quality developers who aren’t willing to relocate.