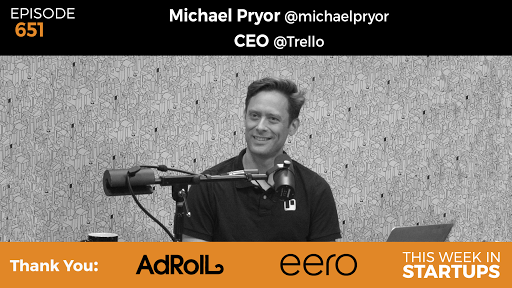 Trello CEO Michael Pryor sits down with Jason to talk about the business model that drove his company to such healthy and steady growth in Episode 651 of This Week in Startups. Grown to over 1.1 million users in just five years Trello has cemented itself in the world of enterprise software. Jason digs in deep to learn the secrets and hacks behind this young company’s success.

Michael corrects a misconception about Trello

Jason explains his interpretation of the company in that, “It’s a tool for managing projects and tasks.” Michael takes us back to the origins of the company and how they came up with the idea. They noticed that all of the software engineering teams were managing their projects on whiteboards. So Joel Spolsky, Michael’s co-founder, put together an idea for “a list of lists.” Michael then gives a basic visualization to break down the concept into three categories: To Do, Doing, and Done. It’s really as simple as that.

Michael demos the product itself

“There are a million ways to use Trello.” With over 14 million users, Trello has features for everyone. From education, to business, to planning weddings, Trello is a platform designed to get things done. Slack even has an internal dashboard on Trello in which every employee is an active part of… they’ve built it into their own common workflow! He shows how by displaying the beautiful and simple Trello dashboard that his team has built and perfected.

The pros and cons of hiring a remote team

Roughly half of the workforce at Trello consists of remote, or virtual employees. There are huge benefits in hiring remote developers, primarily because of the wider net that the company can cast. A lot of developers aren’t willing to relocate, so by only hiring people who are in your company’s geographic vicinity you may be passing up better and cheaper talent. But there are downsides as well. Michael admits that “It’s great to have everyone in the same place, and in an ideal world you would.” Even with all the great internal communication tools at our disposal (i.e. Slack, Wunderlist, etc.), you still miss out on developing stronger personal relationships with your team.

Michael explains that Trello just passed $10 million in ARR (annual recurring revenue), which is 3X the revenue from the year before. He then goes on to share the different ways that they bring in revenue, as well as expand on that revenue. For small businesses they offer “Power-Ups” and new security features in increments along the way. With the enterprise version of Trello they have options such as account managers, and single sign on. But on top of all this he talks about how they keep “kicking over rocks” and just keep happening upon new ways to make money.

People absolutely love the product, to the point where users are more like fans than customers. Michael admits how amazed and surprised he was by how much the people loved the software his team has built. Even though it’s just planning software, “there’s something about it, there’s something about putting people on the same page, and the tactile nature of it, and the visual metaphor that we’re doing that really resonates.” This fan base for his product leaves him with a pretty great sense of security in his company’s mission.

3:35-6:15: Michael corrects a misconception about Trello.

6:15-9:08: Jason and Michael go back and forth explaining the different ways that they use the product in their personal lives… as well as a little tangent on housing in NYC.

12:29-16:48: Michael demos the Trello dashboard and lists off just some of the many ways that people use it.

16:48-20:07: Michael talks about some of the unexpected values that came up as they watched all the different use cases.

20:07-28:46: The two discuss the changing world of business hiring models, particularly in regards to a distributed workforce.

35:15-38:32: Jason shares some of his own feedback mechanisms that he has implemented and experimented with.

45:41-51:36: Michael talks about Trello’s tightening integration with Slack, and how the two companies work in conjunction.

51:36-56:45: The two discuss the difficulties in adding new and customized features based on feedback that is too specific.

56:45-1:04:33: They then change the conversation to the cumbersome world of spam email, and the future of communication through email.