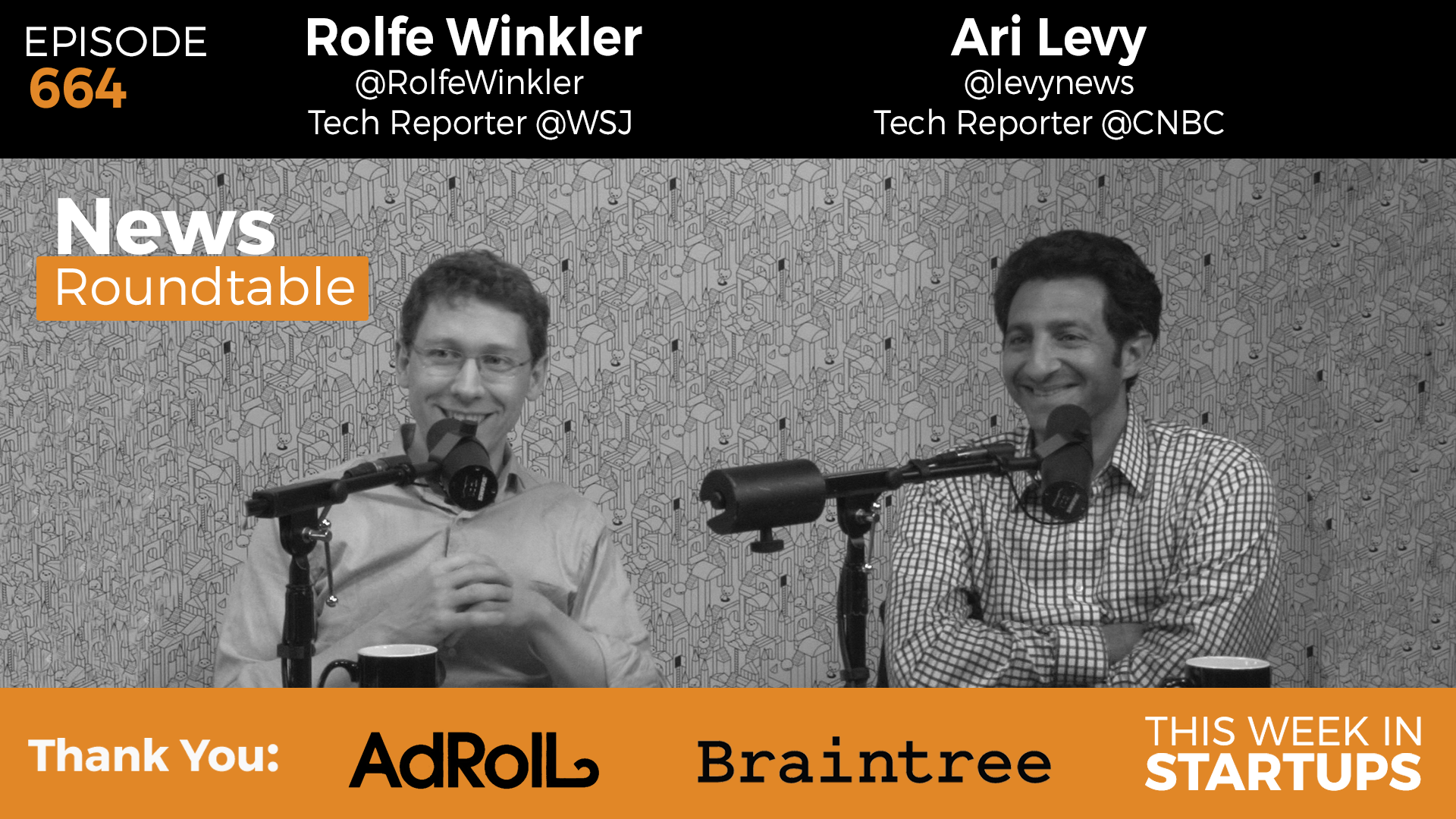 Ari Levy of CNBC and Rolfe Winkler of The Wall Street Journal joined Jason for a must-see News Roundtable on This Week in Startups. An amazing discussion that kicked off with big deal of the week, Walmart snapping up Jet.com for $3b, that crackled on to Google, the government, anti-trust, the entire U.S. debt problem, the Chinese Market, the very future of energy (featuring, naturally, Elon), and the latest in startup CEOs behaving badly. And more.

The big deal of week is Jet.com being bought for $3B by Walmart. What’s behind the deal? Walmart.com has been around since 2000 and has never bridged the gap with Amazon, remaining the #2 player in e-commerce. Could Jet.com & CEO Marc Lore be the answer?

What’s the story of Google, the White House, and anti-trust? Google was investigated on anti-trust grounds by the FTC, but ultimately, the decision was made against pursuing any anti-trust case. The Obama administration has been pro-tech and pro-Google. And lobbying works — both parties have been fairly reluctant to launch any anti-trust campaign within technology in the US.

Debt-to-GDP in the economy, even after some of the de-leveraging from 2009, is still at a level that is “mind-boggling.” The problem is in private debt (corporate, student loan, credit card, mortgage debt). Is this why millennials do not accumulate assets? Where do we go from here? Rolfe shares this slide, which illustrates the USA private debt.

Using the recent Hampton Creek controversy as a starting point, the panelists debate questionable CEO startup behavior of late. When Silicon Valley prioritizes growth over everything, yet any appearance of impropriety IS impropriety, where is that line … exactly?

How much do you want the future to arrive early? Elon would like the world to solve global warming and get off fossil fuels in his lifetime. But we have to decide as a society where to allocate funds. Is there a sustainable, bull market in electric- & self-driving cars? And when you factor in all of the capital and regulatory requirements required, do you bet on Tesla? (or Apple? Google?).

00:56-01:30: Jason introduces the guests of today’s roundtable, Ari Levy of CNBC and Rolfe Winkler of The Wall Street Journal.

02:04-08:20: Rolfe explains the story about Sequoia Scouts program, how he got the story, and Jason’s involvement.

35:18-42:13: Discussion about Uber China Merges with Didi Chuxing, and U.S. companies who have/n’t succeeded in China.

42:14-44:03: Can we produce enough domestic energy so that we’re not relying on the Middle East? How quickly can Elon Musk’s empire scale and are the capital markets going to be available to it?

01:10:34-01:13:34: The group shares their thoughts on Instagram launching a copy of Snapchat, and talk in-depth about Facebook and Zuckerberg.