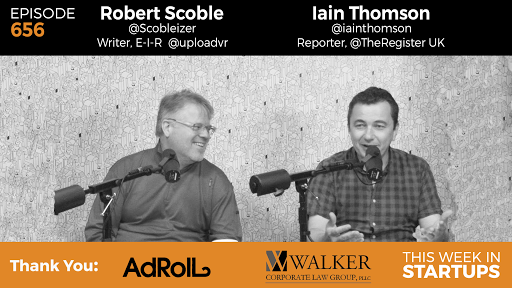 Esteemed reporter Iain Thomson of The Register and seasoned entrepreneur Robert Scoble of Upload VR join Jason for a gripping News Roundtable on this episode of This Week in Startups. Robert starts off the discussion with some juicy background on some of the cutting edge tech in virtual reality, while Iain explains why nobody should be worried about Tesla’s autopilot feature following the fatal accident. The group then rips apart some of the more fantastical ventures, such as a new military beta-tested jetpack, and Larry Page’s investments in flying cars. Finally, with the world on the edge after Brexit, this news roundtable takes a natural turn into both global and domestic political issues, including terrorism, gun control, and national security.

The latest in VR

The group dives into Microsoft’s HoloLens, which is well within the realm of Robert’s field of expertise. The amazing holographic computer is the first of its kind, and it doesn’t take much convincing to sell Jason on it. The other “next big thing” in VR is Magic Leap, and while Iain is skeptical of how impactful the product will be, Robert explains with confidence that it is going to blow people away.

Iain gives info on the details around the infamous autopilot accident that tragically killed a Tesla superfan on a Florida highway earlier this week. The collision involved a high-arching tractor trailer traveling perpendicular to the Tesla. The autopilot feature, which was enabled, did not detect the vehicle and resulted in the death of the lone rider in the driver’s seat. Iain does not, however, feel that anybody should be concerned with this one incident. After all, hundreds of fatalities occur on American roads in regular cars every day. This single incident was only the first, and certainly won’t be the last, but ultimately still maintains that autonomous vehicles are safer… not perfect, but a much better alternative.

Jason shows a video of a recent beta test with a new military jet pack flying over the Hudson River. The jetpack costs $275K, weighs 85 pounds, and runs on jet fuel. While impressive, the reality is that it is far from practical. It burns a gallon of fuel every minute, allowing for a total flight time of… a few minutes, at best. Since The Jetsons, the world has been waiting for the day that everyone can just strap into their personal jetpack and fly into work, but Robert and Iain are in agreement that these things are not only dangerous now, but will never be safe enough to trust in the hands of common people.

Iain holds a passionate stance on America’s relationship with the threat of Terrorism. Of course, nearly everybody does. But he explains that the approach American politicians have taken to “burn the house down” in order to quell the threat is both reckless and inefficient. Iain feels that we have given up extraordinary levels of freedoms and rights to personal privacy due to an over reactionary state of fear in this country. Robert agrees, but also explains an argument he personally heard from the Bush administration that, as leaders, they have an obligation to protect the safety and security of the American people.

The roundtable discussion leads to one of the hottest ongoing controversies in the United States: gun control. Particularly, they look at some of the newest trends in tech as responses to the debate. A handgun that is biometrically assigned to an individual’s fingerprints, and only unlocks if the owner, and only the owner, holds it. While the gun rights activists oppose virtually all changes to gun laws, Robert, Iain, and Jason are in agreement that if the NRA would back some of these more sensible safety measures, the people divided on gun rights issues might be able to find some common ground.

16:45-23:19: The first fatality in Tesla’s autopilot mode. What happened, and should we be worried about autonomous vehicles.

23:19-30:28: Robert and Iain get into the mountainous list of benefits to self-driving cars.

34:26-38:35: Jason asks Iain what this incident means for Tesla and the overall pursuit of self-driving cars.

41:10-45:16: Larry page has invested millions in two separate flying car companies. The group tries to decide if it’ll ever be worth it.

45:16-49:13: The members of the roundtable are overtly impressed with Boston Dynamics’ robots.

49:13-53:00: Jason asks when his two guests believe every home will have robots helping with daily tasks.

53:00-56:14: The group dives into the story that Iain recently wrote about the issues with the FBI and national security.

56:14-59:29: Iain explains his stance on America’s obsession with being fearful of terrorism.

59:29-1:02:59: The group discusses the sad reality that we aren’t supposed to trust our own law enforcement.

1:06:48-1:20:50: Arguably the most divisive debate in America: gun control. They share a couple of the newest gun safety products from the tech industry.