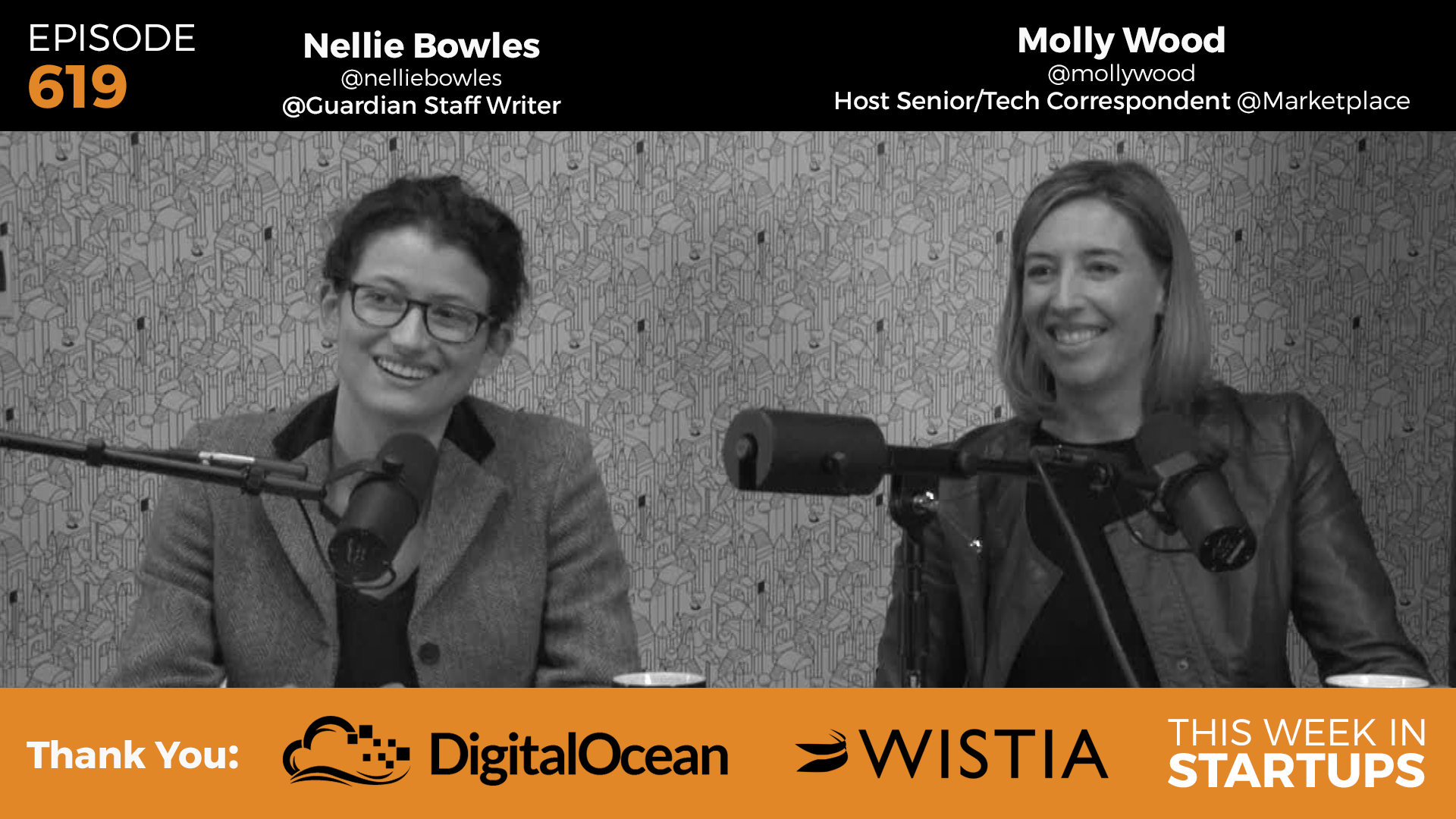 On episode 619 of This Week in Startups, Jason sits down for another News Roundtable, with Molly Wood from Marketplace, and Nellie Bowles from The Guardian. Through the course of conversation, they touch on some of the hottest issues in startups and Silicon Valley news: ongoing developments from Theranos, the competitiveness of incubators like Y Combinator, room for improvement at both LinkedIn and Yahoo, and how San Francisco is faring as the Super Bowl approaches. Here are some of the highlights from their conversation.

Who Wants to Write the Theranos Narrative?

Following on the heels of his conversation with Wall Street Journal reporter John Carreyrou in episode 617, Jason is eager to hear both Nellie and Molly’s perspective on Theranos — and whether Elizabeth Holmes’ role in the controversy will impact female founders. Additionally, they discuss the irony of Theranos’ latest headline looking for a writer to join the team, who can “conceptually solve problems through the power of excellent storytelling”; both writers give their opinion on the opportunity (or lack thereof).

After discussing Theranos, conversation turns toward how the right outside guidance is crucial to creating successful startups, and the role incubators play. Y Combinator comes up, and Jason gives Molly and Nellie a peek behind the veil at some of the dynamics going on with VCs and incubators in the Valley. They also discuss how founders can adapt to the often treacherous political and social pitfalls that abound.

Jason then brings up another headline from the day: LinkedIn’s stock plummeting over 40% with relatively no provocation. Molly gives her opinion about how spooked the entire market is right now (echoing sentiments from the last News Roundtable with Mattermark’s Danielle Morrill and NYT’s Katie Benner), and the group discusses how LinkedIn both provides value, and could improve their product offering.

The Scorecard from Marissa Mayer’s Time at Yahoo

Next, the group dives into ongoing news about Yahoo including mass staff departures and a lawsuit against Marissa Mayer for unfair HR practices in favor of women. Molly and Nellie both provide opinions on failures of Yahoo in the past several years. Nellie concludes that Yahoo has made a significant contribution — and it’s okay that its sun has set.

The conversation ends on a discussion of San Francisco, in the context of the Super Bowl and the latest news about corruption related to Mayor Ed Lee. The group as a whole laments the social problems that seems to be more prevalent in the city despite its current ‘boom’ status, and Nellie ends with a great discussion of how tensions in San Francisco are preventing it from adapting and growing to meet the needs of those living there.

Want to hear the whole conversation? The full episode with Molly and Nellie, as well as past episodes are all available on This Week in Startups.

2:59–11:24: Jason, Nellie, and Molly discuss the ongoing news about Theranos, the frenzy in the biotech industry, how investors and journalists play into these frenzies, and the need for governance.

14:39–17:30: Jason asks Molly and Nellie about how Elizabeth Holmes’ role in Theranos will affect female founders in the Valley.

19:20–21:13: Jason lets Molly and Nellie know about the opportunity to be a ‘writer’ at Theranos, and they discuss.

21:13–26:19: Jason, Nellie, and Molly discuss Y Combinator and the dynamics of incubators and investors/VCs at events like Demo Day.

29:20–32:30: Molly asks Jason about how founders and entrepreneurs are faring in the current Silicon Valley atmosphere with the competitive incubators.

32:30–34:20: Jason continues discussing how Y Combinator interacts with VCs and other interested parties.

34:20–36:50: Molly sounds off about LinkedIn’s stock decline and how guidance plays a role in the success of companies.

41:07–43:33: Nellie, Molly, and Jason discuss LinkedIn’s product and what improvements they can make

43:33–44:21 — Molly gives some insight into the skittishness of investors and the market right now.

44:21–47:08: The conversation on LinkedIn continues, and turns toward Theranos again.

59:48–68:05: Jason lays the foundation for conversation around the latest controversy surrounding Ed Lee, and the social problems San Francisco is facing.