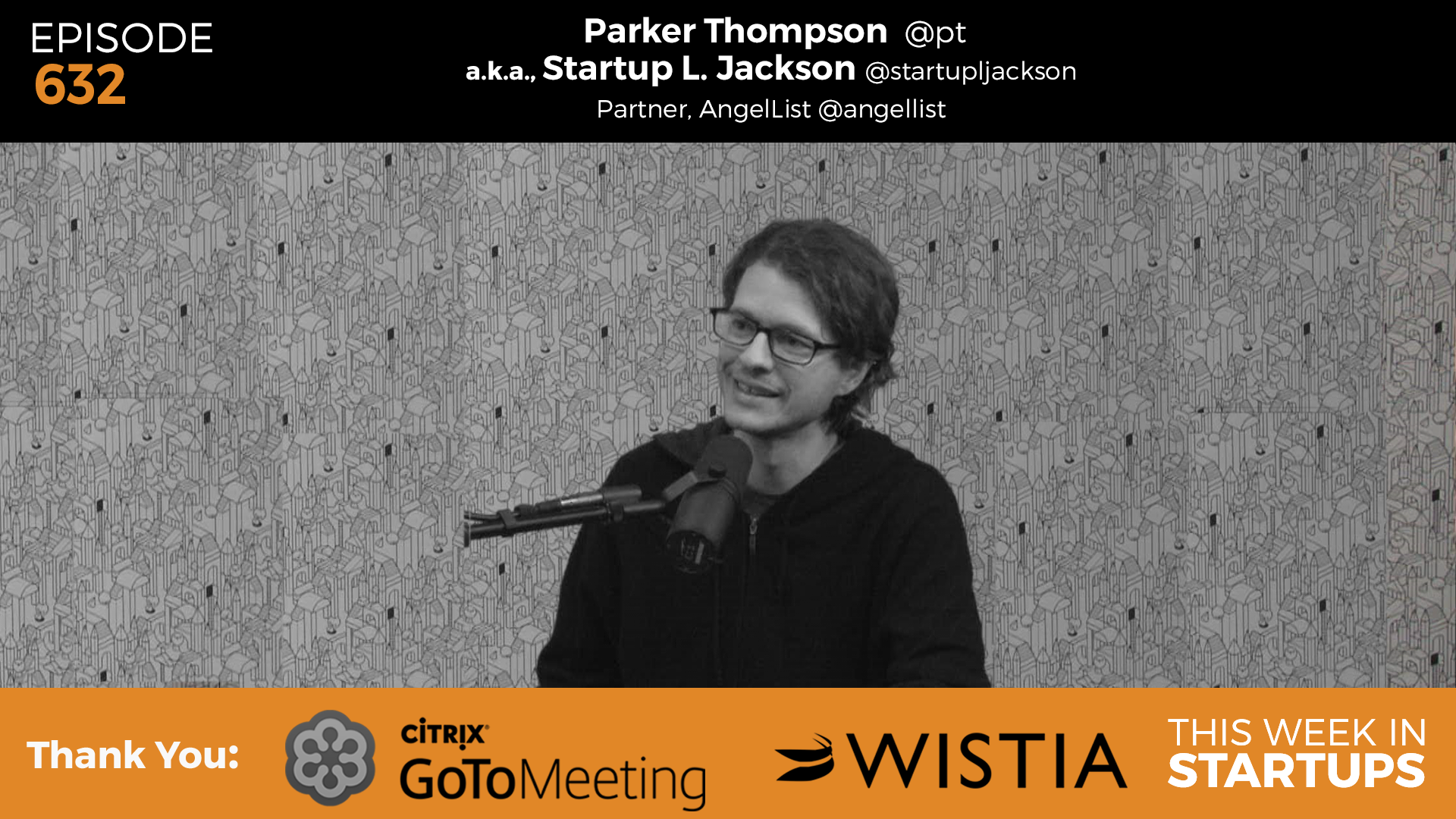 In episode 632 of This Week in Startups, Jason sits down with Parker Thompson, creator of popular parody Twitter account Startup L. Jackson, current partner at AngelList, and previous partner at 500 Startups. Topics of conversation range from the inspiration behind Startup L. Jackson to having ‘sharp elbows’ on the internet, from diversity in entrepreneurship and investment to how AngelList syndicates and equity crowdfunding rules are changing the venture capital landscape.

The Beginning and End of Startup L. Jackson

Jason asks Parker about where the idea from @StartupLJackson came from, and Parker discusses how the character was meant to give him a way to express ideas about Silicon Valley at a time where he couldn’t do so under his own name. He does point out that he thinks friends would say he’s actually more offensive in real life than the Twitter account was, and that he decided to wind down using the account because the character had run its course. They also discuss how the weight of keeping conversations civil and managing the constant stream of notifications can make social media too heavy to be enjoyable.

Parker is Passionate about Diversity

During the conversation, Parker and Jason discuss diversity in Silicon Valley. Parker speaks passionately about how diversity is still a major hurdle in startups and investing, and how he believes founders who come from under-indexed backgrounds often show more grit and determination to succeed than he sees in other founders. He also says it’s the responsibility of each company, founder, and investor to build their own funnel to encourage diversity. Finally, he and Jason discuss how investing in diversity can actually provide an advantage and better returns because it’s not the common investment strategy others are using.

The Future of Syndicates at AngelList

Now working for AngelList, Parker gives some insight into how Syndicates have become a fundamental part of the company’s offering. He and Jason then discuss the future of Syndicates, possible features and directions AngelList may go to encourage investors, and how the SEC Title III approval for equity crowdfunding will impact the industry.

Want to hear the whole conversation? The full episode with Parker Thompson, as well as past episodes are all available on This Week in Startups.

0:30–4:27: Jason introduces Parker Thompson, aka @StartupLJackson, and they chat about the occasional ‘sharp elbows’ and offensiveness that the account occasionally communicates.

4:27–8:55: Parker talks about where the idea of Startup L. Jackson came from, the rise of permanent/non-permanent information, and how the account grew to over 80,000 followers.

8:55–10:41: Parker and Jason continue discussing the response to parody accounts and start talking about the power of anonymity

13:17–16:15: Parker discusses some of his professional history, including his time at the Internet Archive

16:15–20:09: Jason asks Parker about reported tweets, getting banned, and having honest conversations on Twitter. They also talk about how Startup L. Jackson fits into Parker’s professional life, and why he stopped.

22:59–29:20: Jason and Parker discuss diversity in the startup/entrepreneurship industry. They also talk about how this plays into the Startup L. Jackson character.

31:02–32:30: Parker gives insight into the grit and determination he sees in some founders, and where he thinks that comes from.

35:20–42:14: Jason and Parker talk about his time at AngelList and some of the recent developments for the marketplace and Syndicates.

42:14–48:30: Jason discusses how he uses Syndicates in AngelList and Parker gives insight from a company perspective.

49:45–54:32: Parker discusses what the team at AngelList looks for in Syndicates and the deals they encourage. Jason gives insights into his own philosophy for deals.

54:32–1:02:43: Jason asks Parker about the SEC Title 3 crowdfunding rules and the net worth rules for accreditation for investment.