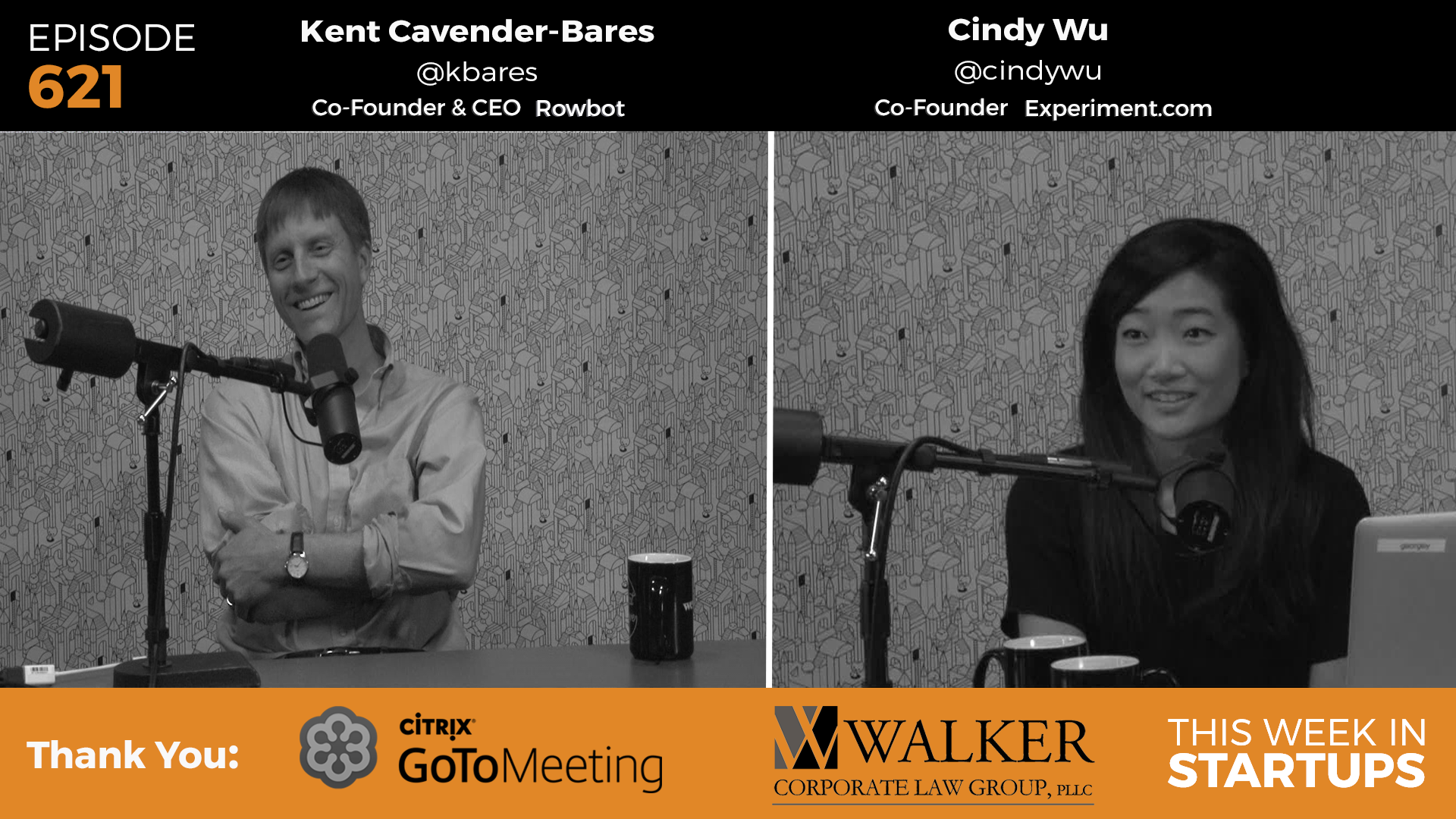 In episode 621 of “This Week in Startups,” Jason and his guests get into all sorts of weird science. The first half focuses on Kent Cavender-Bares, who created an agricultural technology company that specializes in robots the fertilize fields. (The name? Rowbot, of course.) Then, Jason interviewsCindy Wu, whose Experiment allows scientists of all shapes and sizes to crowdfund their research. Here’s a preview of what Kent and Cindy shared.

1. Agricultural startups are a hard sell
Rowbot has faced a unique set of challenges in Silicon Valley. It’s a hardware company, and it’s concerned with Midwestern agriculture, so Kent and his co-founder brothers have had their work cut out for them. But the company is now nearing its fourth birthday, and continuing to release impressive videos of the Rowbot in action.

2. Cannabis crops may not be the cash cow of the future
Jason wonders if cannabis is poised to be the next big thing in farming, as more and more states legalize marijuana. But Kent remains skeptical. “I bet it’s going to be niche and it’s going to be really controlled,” he says. “In Minnesota there’s medical marijuana…but they’ve only allowed a couple of companies to produce it, and it’s still highly regulated.” Still, he jokes that “there’s a lot that goes on in cornfields.”

3. Science is cheap
Or at least cheaper than most people think! Cindy says the average funding size for a project on Experiment is just $5,000, much to Jason’s surprise. “I think there’s a common misconception that science is expensive,” she notes. Cindy also says that the site has had repeat scientists, so researchers could potentially make a living off crowdfunded projects on Experiment.

4. Experiment is coming for stingy scientific journals
Jason and Cindy agree that scientific journals that lock research behind a paywall are doing the public a disservice, and Experiment plans to put the pressure on by starting its own journal with open access for all. Cindy hopes that this will help kick closed access journals out of the game in a few years, although Experiment has only put out one issue so far.

5. Anyone can be a scientist
It’s a mantra Cindy repeats several times in the podcast, and she proves it by pointing to the high school students launching gardens into space and nontraditional experiments on her site, including her own vital research on the perfect chocolate chip cookie.

Timestamps
2:31–4:29: Jason asks Kent how he got into agricultural technology with his company, Rowbot.

25:03–27:38: Jason and Kent debate GMOs vs. organic, and continue their conversation on future farming technology.

31:50–34:55: Kent explains why he’s optimistic that the food supply will get better and more abundant.

35:38–37:19: Jason and Kent discuss the possibility of community farms and weekend farmers.

52:02–54:53: Cindy shares the story of the Experiment project that raised the most money: “Finding a Cure for Batten Disease.”

57:46–58:39: What are the ethical guidelines for Experiment? Cindy reveals how the site deals with research involving human subjects.

58:40–1:00:40: Jason and Cindy break down the cost of an average Experiment project, and discuss the possibility of completely crowd-funded scientists.

1:10:13–1:14:26: What is Experiment’s sustainability model? Jason thinks this is a huge opportunity for brands.