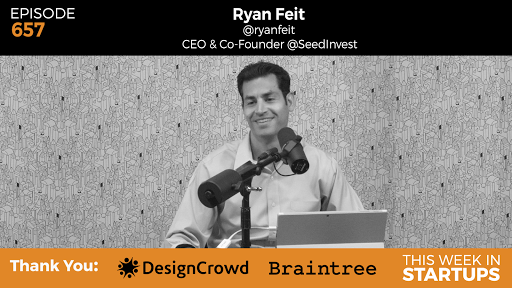 Jason connects with equity crowdfunding pioneer Ryan Feit to discuss the groundbreaking Title III law, giving way to a brand new form of startup fundraising. The fight to end “80-year-old laws” regulating investment freedom has come to an end under the new section of the JOBS Act. As the CEO and Co-Founder of SeedInvest, as well as being an integral player in the movement to pass legislation to allow civilians the right to invest in startups, Ryan’s expertise in this new era of fundraising is unparalleled.

Protecting investors & the history of the SEC

“The SEC’s job is to protect investors, that’s it.” Ryan explains that the policies surrounding business investment were originally put in place in the 1930s, when there wasn’t the kind of company transparency that there is now. The laws were in place to prevent scammers from taking money from strangers and running away with it. However, people are much more cognizant of their finances now. It doesn’t make sense to keep perfectly qualified investors out of the game because they don’t fit criteria that was put in place before the television, much less, the internet.

The impact of Kickstarter

Jason asks Ryan why the government began to change their mind about non-accredited investors. The short answer is simply that the lawmakers in our country saw what Kickstarter was doing during the late 2000s, and recognized that the internet was opening up a whole different sector in raising capital. Kickstarter was the first domino to fall in a long line of successful crowdfunding platforms that have finally reached the legislative body, which has now granted new online fundraising possibilities through Title III and equity crowdfunding.

Ryan explains that his company has always held a very strict vetting process for the companies who apply to SeedInvest. Ryan’s company thesis is, “We want to build a platform that is based on quality over quantity.” The two most important things that SeedInvest holds as values when evaluating a company are firstly, to fund businesses and not ideas, and second, that the company in question can prove demand for their product.

Importance of communication between founder & investor

Ryan explains how critical it is for post-investment communication. At SeedInvest, they require, up front, that the companies promise quarterly updates as part of the investment deal. Keeping the investors informed is a top priority as part of the business structure. With an average of 7 out of 10 startups failing, it is absolutely critical that investors are in the know when one of their portfolio companies is on a negative trajectory.

How SeedInvest makes their money

Through Title III, SeedInvest is now capable of an entirely new profit structure within the world of crowdfunding. First, they charge a placement fee, which is a commission on the company’s raise. On top of that, they take 5% equity of whatever capital is raised through SeedInvest.

1:24-4:24: Jason introduces the topic of the episode: the equity crowdfunding revolution.

17:38-19:43: Virtuix is an excellent example of a company that has taken advantage of Title IV.

19:43-22:00: The two list off all the different types of people who seem perfectly qualified to invest, but are not officially qualified for accreditation.

24:33-30:22: Ryan explains why SeedInvest’s rate of acceptance into their program is so low.

32:20-33:58: Jason shows the commercial video that he mentioned earlier in the program.

33:58-35:46: Ryan shows off the SeedInvest website and shares the process to apply as an investor or founder.

36:33-38:38: Ryan shares the importance of communication between founder and investor.

40:02-43:18: Jason asks Ryan if it is better to invest as a VC, through an angel syndicate, or equity crowdfunding.

49:55-53:07: Jason applauds Ryan for taking such an unorthodox approach to startup investment.