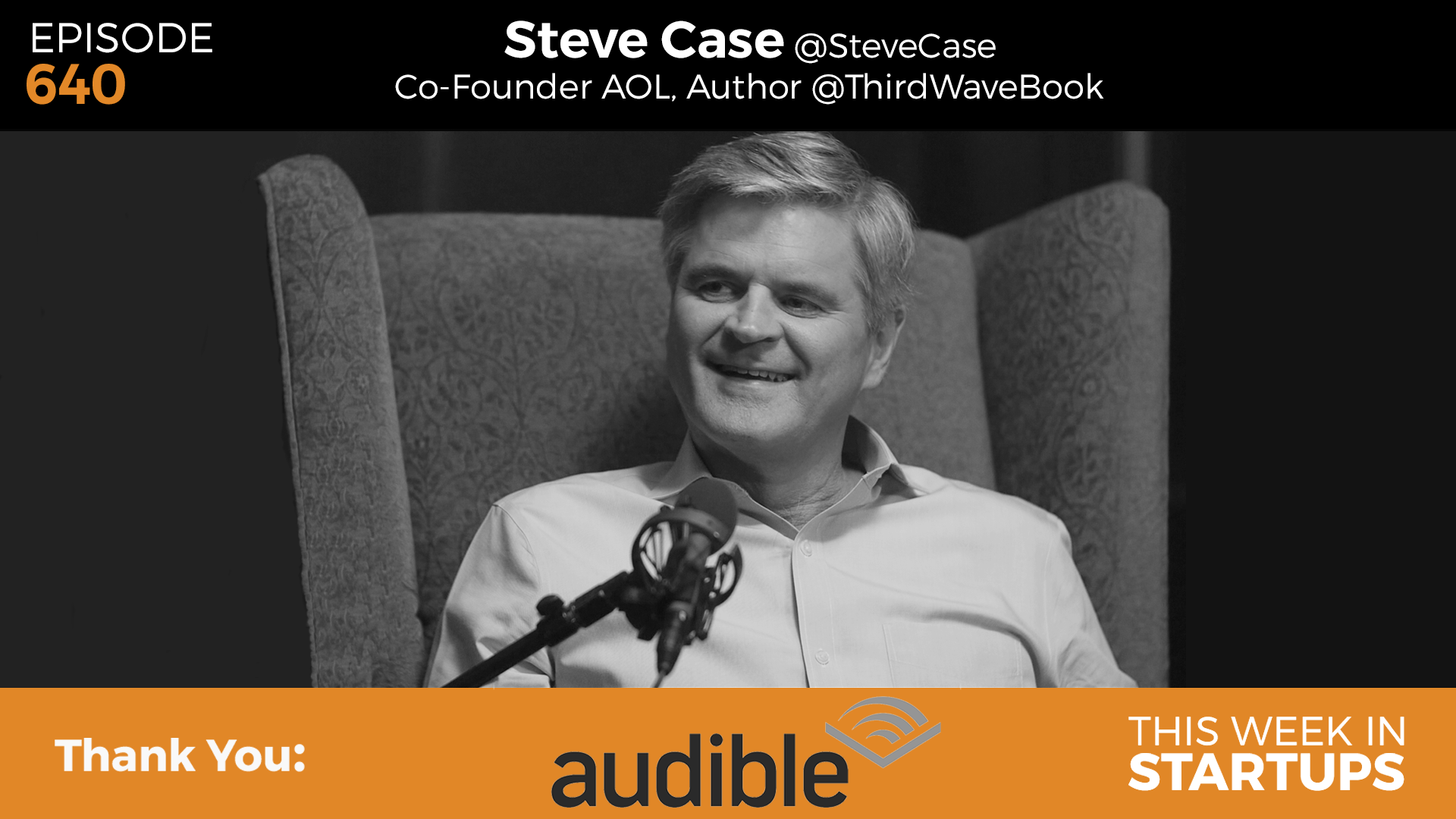 Audible, the leading provider of audiobooks with over 180,000 titles. Get your free audiobook at audible.com/twist.

Jason’s audiobook of the week is “The Man Who Knew Infinity,” written by Robert Kanigel & narrated by Humphrey Bower.

[/vc_column_text][vc_column_text]Steve Case’s new book The Third Wave is the centerpiece for this special episode of This Week in Startups, and who better to discuss the content of the book than the author, Steve Case himself! Jason sits down with the legendary internet pioneer and founder of AOL to discuss the early days of the company, the intermediate years of the internet, and the future of innovation. The book focuses around the first two ‘Waves’ of the internet, and then delves into what Steve forecasts as the coming “Third Wave.” Steve’s vision for technology in the coming years is captivating, and this in depth interview helps explain the reasons he is listed among the great tech innovators of our time.

The early days of AOL

Steve Case founded the company in 1985, almost a decade before the internet really took off. It wasn’t really until 1990 that the company became America Online as we know it. Prior to that, they primarily were partnering with companies like Apple and IBM, and offering add-on software features to integrate into their own systems. Steve shares a couple of intriguing stories of how he managed their partnership with Apple, and taking four years to convince IBM to build a modem into their PC.

The first two ‘Waves’ of the internet

Think of the first wave as the building of the internet. Companies like AOL and Cisco are two of the first to come to mind when discussing the driving forces of this era. The first ‘Wave’ was “basically taking an idea and turning it into reality,” says Steve. Building the software and the infrastructure to make the internet possible. Steve defines the second ‘Wave’ as the last 10 to 15 years where we basically built apps and services within the framework of the internet… the era of MySpace, Napster, Facebook, etc.

What is the ‘Third Wave’?

Steve anticipates the ‘Third Wave’ to be centered around taking the technology that we’ve already created, or are currently creating, and integrating it into everyday life. It will require working closely with policy makers and institutions in ways that entrepreneurs and innovators didn’t have to during the first two waves. Facebook, Youtube, Twitter… these companies effectively changed everyday life in the boom of the Second Wave. But Steve believes the Third Wave will be focused around companies like Uber, AirBnB, and SpaceX, which are challenging the status quo on a regulatory level, and will require these tech pioneers to recognize the importance of “partnerships, policy, and perseverance.”

Are companies too quick to pivot these days?

Jason brings up the question of perseverance, one of the “Three Ps” in Steve’s book. The early giants like AOL, Apple, and Yahoo took years to gain traction and get off the ground, yet it seems like many companies today give up on their mission and change direction if it’s not working immediately. Steve thinks it’s not necessarily a bad thing to recognize that if your product isn’t working you need to make an adjustment. However, in the case with AOL and many other early internet companies, it was a question of timing, which is different. They knew they had the right product, they just needed to wait it out until the people were ready for it.

Arguably the most iconic corporate merger of the last several decades was when AOL bought Time Warner in 2000. Many believed this new company would become the most influential business in the world. As we all know, the merger did not pan out the way anyone could have anticipated. Jason asks Steve if he is bitter about how the whole debacle turned out, and Steve appears to be unscathed. He made one of the greatest deals in history, but the culture, timing, and execution following the deal just didn’t work out. He learned some important lessons through it, but ultimately he’s a man who looks to the future and doesn’t sweat the past.

2:40-3:55: Steve discusses the inspiration for his new book, and gives a brief overview of what the third wave is.

3:55-6:02: Steve shares the story of the early days of AOL and the decision to pivot, which directly led to what we now know as America Online.

6:02-10:04: Steve explains his tenacity as a young entrepreneur, and the lengths that he went to in order to land some of his biggest partnerships.

10:04-12:28: The conversation reverts back to the many twists and turns involved in AOL’s youth.

17:56-23:13: Jason and Steve discuss AOL’s strategic partnerships, and the differences between the first, second, and third waves.

25:34-32:50: Steve dives into exactly what he believes the Third Wave will be in the very near future, and the companies that are already falling into that category.

32:50-35:44: ‘The Three Ps’: Steve explains the importance of partnerships (One of the Three Ps) for companies in the Third Wave.

35:44-37:09: Jason asks Steve if he believes entrepreneurs are too quick to pivot these days.

48:53-52:09: Jason asks Steve if he misses being CEO of a major corporation, and which company, if any, he would run if offered.

52:09-55:11: Steve shares his entrepreneurial roots, from growing up in Hawaii to working for Pizza Hut in his early twenties.

56:32-59:00: Is entrepreneurship a level playing field now? Does everyone have an equal shot at building a company?