Deprecated: File Theme without header.php is deprecated since version 3.0.0 with no alternative available. Please include a header.php template in your theme. in /home/thiswee/public_html/wp-includes/functions.php on line 5579
 E542: TrueCar's Scott Painter & Zenefits' Parker Conrad bring new power to consumers & successfully reinvent entrenched industries: car-buying and human resources | This Week In Startups 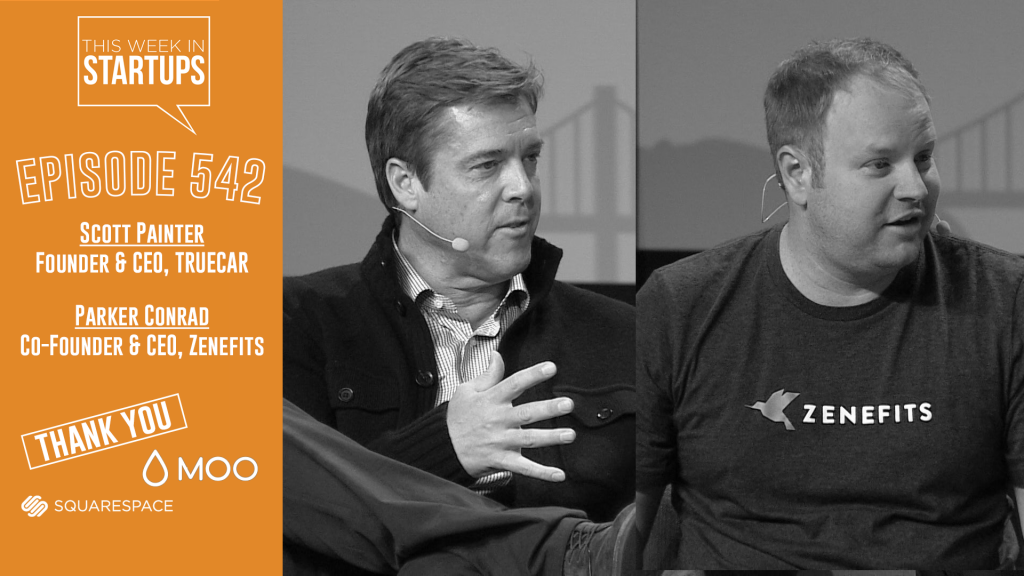 MOO is an online print and design company that helps you stand out from the crowd. MOO creates premium quality, customizable business cards, and promotional materials. Visit moo.com for more details.

Squarespace. Build it Beautiful. Celebrating 10 years of making it fast and easy to create an exceptional-looking website! Get 10% off your first purchase at squarespace.com/twist.

Today’s awesome two-part episode from Launch Festival 2015 features Founder/CEO of TrueCar Scott Painter and Cofounder/CEO of Zenefits Parker Conrad. Jason first sat down for a fascinating discussion with Scott about the mission of TrueCar (simple: a better way to buy a car), and how his business disrupts the industry. We learn how they have grown from $10m-$200m in revenue since launching at the Launch Festival a few years ago, how they overcame being boycotted by 33% of the car dealers on their platform in 2011, why car dealer problems are actually bigger than car buyer problems, why Scott is not a huge believer in self-driving cars (his 20-year plan does not involve autonomous cars) or in car ownership going away (the car industry is at an all-time high), and why Apple should buy Tesla for any price.  In part two Jason talks with Parker Conrad about the inspiration behind Zenefits (hint: Parker’s pain in doing all the HR as Cofounder in his last company), and how the company is absolutely crushing it. In their discussion they cover Zenefits’ meteoric rise as the fastest growing SaaS company ever (grown to 800 employees in two years) with no plans to slow down, why “the Salesforce for employment” is an interesting analogy for the Zenefits business, how Andreessen Horowitz was a huge help in landing David Sacks (former Yammer Founder/CEO) as COO, how Jason switched his companies to Zenefits last year & is saving huge $$ — and much more!