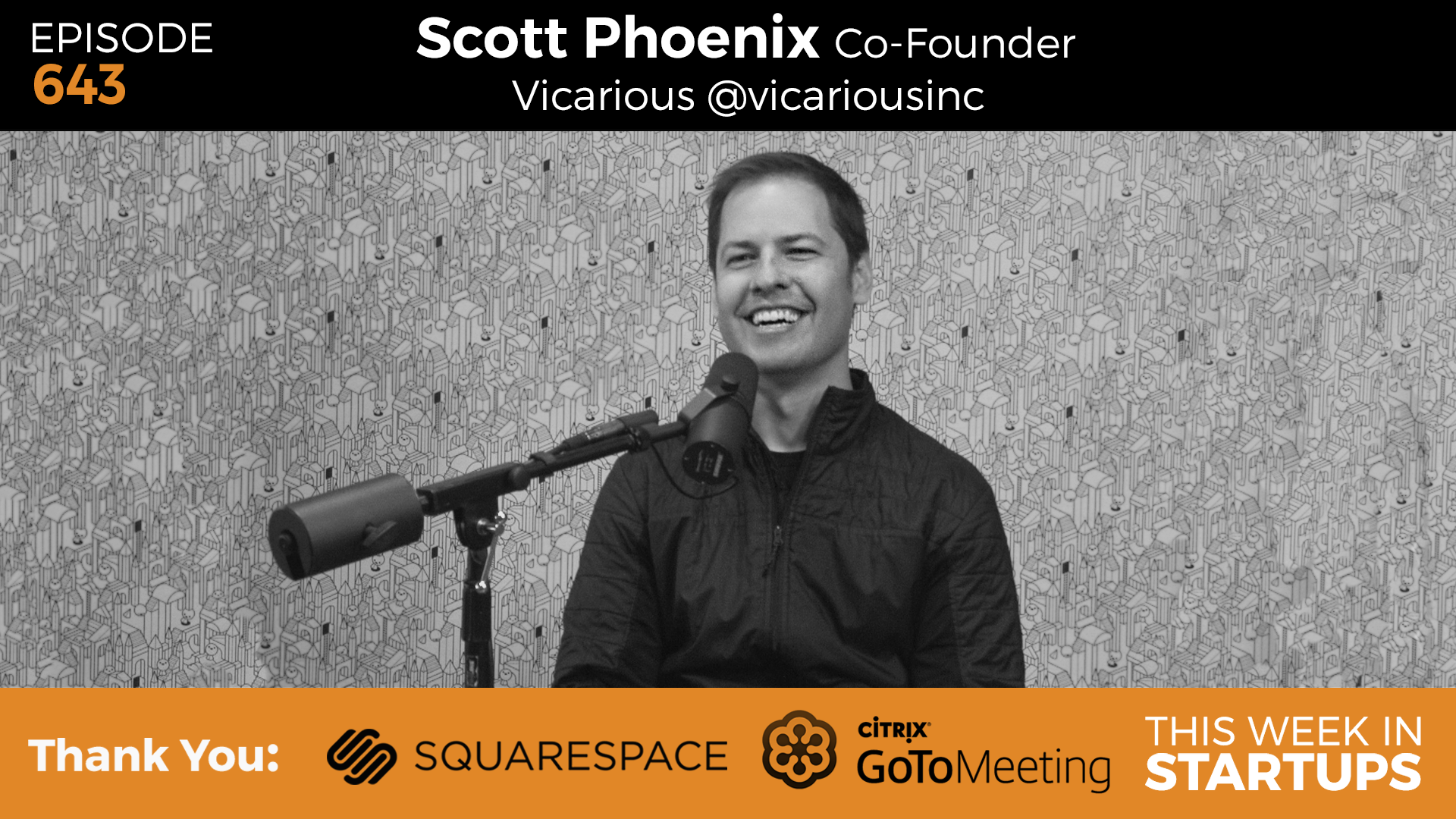 True artificial intelligence is arguably the ultimate technology. To create machines that not only learn, but teach themselves, is sure to unlock new realms of technological possibilities that we haven’t even considered. This is exactly what Vicarious aims to accomplish, and exactly why distinguished investors such as Elon Musk, Mark Zuckerburg, and Peter Thiel are pouring funding into this revolutionary company. In episode 643 of This Week in Startups, Scott Phoenix, co-founder of Vicarious, sits down with Jason for an in-depth interview on the inner workings within his groundbreaking AI company.

Establishing the difference between ANI & AGI

“So let’s introduce a distinction… ANI (artificial narrow intelligence) and AGI (artificial general intelligence).” Examples of uses of ANI are IBM’s Watson, the Facebook feed, Apple’s Siri, etc. Scott uses a simple metaphor to explain what makes these programs ‘narrow.’ He compares them to reptilian animals, who often operate in complex ways, completing fairly complex tasks. But they can’t build tools or reason on intellectual levels. AGI is comparable to mammal or even human brainpower, in which it can learn, teach, and create.

Jason asks who Scott thinks will solve the self driving car problem first. Scott responds by pointing out that there are multiple levels of the self driving car that different companies are approaching in their own unique ways. Level 4, driving from door to door with no human interaction whatsoever is still a ways off, and whether Google, Tesla, or Uber accomplishes that first is still very much up in the air. But if we are talking about level 2, where the car is smart enough to maintain a lane or recognize distance between objects and react appropriately, there are multiple companies that have already put that into practice.

What is the goal of Vicarious?

The inspiration for Vicarious, the model for what they are trying to accomplish, is the human brain. Specifically, the neocortex. Scott goes into detail on this thin layer of the brain, and how it allows us to control our motor actions, make visual recognitions, store our thoughts and memories, process touch, taste, smell, etc. He then points out that the neocortex is a very similar circuit across the entire space, although it processes different things in different areas, the circuit itself is basically repeated over and over. So, Vicarious believes that the secret to AGI lies within the framework of the neocortex, and unlocking that could be the key to the ultimate technology.

How will AGI change everyday life?

Jason and Scott take turns imagining future potential scenarios with AI. From thinking apps into existence, to your personal robot making your favorite breakfast, the two list their favorite Jetsons-like versions of tomorrow. But the bigger point that Scott makes is that once we unlock AGI, that is virtually the last invention humankind will ever make. The AI will be able to solve problems that we as humans could never solve with our comparably simple brainpower. It will be able to come up with technological applications that we can’t even imagine now.

Should we be fearful of AI becoming too smart?

Elon Musk feels very strongly that we should approach the cognitive machine reality with caution. People like Larry Page, on the other hand, think that dystopian AI dominance over humanity is not a genuine concern. Jason asks Scott where he falls on the spectrum of AI’s potential danger. Scott points out that when you build a fire you build it in a way that will benefit you but will not harm you. The same is true as AGI is built. Those working on artificial intelligence will, and are, taking into account the fact that they want it to be beneficial, not destructive. If the AI is smart enough to figure out how to destroy humanity, it is also probably smart enough to figure out what it was that we wanted it to do in the first place, i.e. NOT KILL US! The potential problems with machines becoming too smart are not difficult problems to avoid.

4:08-11:08: Scott explains the limitations of ANI and the current uses of this narrow machine learning in Facebook and self-driving cars.

12:52-13:39: Jason names an impressive list of investors involved in Vicarious.

13:39-16:27: Scott explains the problem that we have right now in regards to robots. We have great hardware, we just don’t have the software tuned in yet to build truly pragmatic robots.

16:27-19:01: Scott explains why Vicarious is focusing on the neocortex of the human brain as the model for the AGI they are trying to build.

25:47-28:00: Scott explains how his company raised so much money from such a distinguished list of investors.

28:00-31:11: Scott explains what is missing in current AI, and why the research needs to be focused on the human brain.

34:08-35:38: Jason asks about how Vicarious operating its computing platform, and wonders if the quantum computing movement will help in the AI movement.

35:38-42:59: Jason and Scott go back and forth imagining what everyday life will be like in the future with AI.

42:59-44:46: Scott shares his thoughts on how we can benefit from general intelligence in the much nearer world of tomorrow.

50:44-55:10: Scott talks about the academic symposium he attended, where a room full of the brightest minds in AI discussed the priorities of the field.

55:10-: The discussion turns to Google’s Deepmind project. Scott explains that Vicarious focuses much more on imagination and creativity.

57:33-1:04:10: The two discuss the potential danger of AI, and how careful we need to be as we approach sentient machines.

1:11:56-1:15:42: Vicarious is always looking for brilliant minds to add to the team. Jason asks what a typical team member at Vicarious looks like.

1:15:42-1:18:52: Scott admits how lucky he is to be working on a problem such as this… potentially the greatest problem that will ever be solved.

1:18:52-1:22:15: Scott turns the tables and asks Jason about his take on how Silicon Valley has changed over the last ten years.

1:22:15-1:27:23: Jason’s final question for Scott is in regards to what he would have done differently with Vicarious if he could go back in time.