Deprecated: File Theme without header.php is deprecated since version 3.0.0 with no alternative available. Please include a header.php template in your theme. in /home/thiswee/public_html/wp-includes/functions.php on line 5579
 E655: Journalist Virginia Heffernan on her new book, “Magic and Loss: The Internet as Art,” the web's earliest days, Twitter poetry & pain, free speech, minimalist theism, TV triumphs & more | This Week In Startups 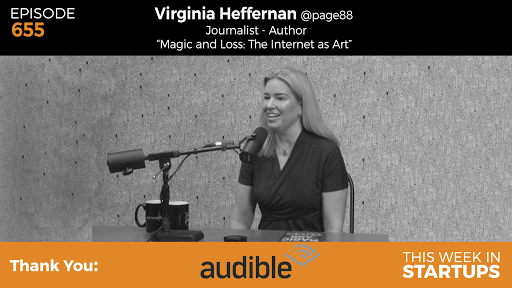 Audible, the leading provider of audiobooks with over 180,000 titles. Get your free audiobook at audible.com/twist. Jason’s pick of the week is Sapiens: A Brief History of Humankind, written by Yuval Noah Harari & narrated by Derek Perkins.

“The internet is the great masterpiece of human civilization.” The world wide web has shaped the modern world in ways that the greatest creative minds of the past could never have imagined. Author, journalist, columnist and critic Virginia Heffernan joins Jason to discuss the impact of the internet and how that impact inspired her journey through the creation of her brand new book, “Magic and Loss: The Internet as Art.” With an unprecedented writing background ranging from Staff Writer at The New York Times to national correspondent at Yahoo News, Virginia has been long overdue for publishing her first book.

The early days of the internet

Virginia shares some stories about the incredible impression the internet had on her as a child, even in its most primitive phase. It was 1979 when she first got on the internet, and in those days it was called a “networked computing system.” She had the unique advantage of being taught ‘BASIC’ by her dad’s colleague, John Kemeny, who created the programming language himself. She was utterly fascinated by the connections she could make through this cutting edge technology. Eventually, she swore off computer science and moved on to studying writing and humanities… but there was a magic in those early days of the internet that stuck with her throughout the years.

A friend of Virginia’s told her recently that “the internet can’t be art because Twitter is so angry.” Her response to that was, “What about heightened emotional states is inconsistent with art?” The rage surrounding people on the internet can drive a large impact on the collective think online. Writers, in particular, are consistently in the line of fire from Twitter trolls. Jason asks if she feels that her writing “is shaped by the hate,” subconsciously or not. She replies by stating that, “the hate on the internet has changed my writing for the better.” She gives several thought-provoking examples to explain how Twitter has changed the way she approaches writing.

Jason brings up an important problem with students in this modern society. It was good to hear opinions from your professors that challenged your beliefs and challenged the way you think. But now, there seems to be an ongoing trend in universities everywhere for students to complain and proclaim that they really don’t want to hear anything that doesn’t conform to their own preconceived values. This triggers the issue of free speech and civil liberties for Virginia, who brings up a shining example of one of the drivers behind this sort of mentality: Donald Trump openly claiming that he will shut down the Washington Post because he doesn’t like the things that they write about him.

She took on heavy fire from the internet after writing a story titled, “Why I’m a Creationist,” a few years ago. Her purpose in writing the article was to argue that the universe is not entirely materialistic. What came before the big bang? How do you explain consciousness? Questions like these were at the forefront of the piece. Her belief in ‘minimalist theism’ is not an extreme idea, essentially maintaining that God exists but doesn’t hold control over everything. But simply by mentioning God in a publication she seemed to cross a line for people whose expectations are to discredit anyone in the journalistic space who has any ties to religion.

Virginia reads an excerpt from the music section of her book showcasing her incredible talent with prose. “MP3 tricks the senses,” she reads, “…we long to gain what has been conspicuously squeezed out of a lofty compression.” She elegantly explains the deep, internal reasons that we, as humans, crave live music. It is the authenticity of a social engagement and raw sensory experience that brings us purpose. That is something that we can’t grasp through the digital sound waves created by the chips in our iPhones. Artists’ revenue comes from touring now, not album sales. File sharing hasn’t killed the music industry, as many feared it would, it has simply altered the source of value that we gain from music, opening the gates to alternative musical experiences.

0:20-1:55: Jason shares his adoration for Audible, and introduces his guest, Virginia Huffernan.

1:55-2:27: Virginia explains why she thinks that “GenXers” are more entitled than the Millennial generation.

2:27-6:56: Virginia shares the original inspiration for writing “Magic and Loss.”

15:50-24:16: Virginia reads an enticing excerpt from the book, and then converse about how the internet rivals all human inventions in history.

34:30-40:32: Jason asks how Virginia came up with her Twitter name. She goes on to talk about how much the rage on Twitter has shaped her writing.

40:32-42:55: Virginia shares a story about how she quoted a Tweet that was construed as racist by many readers, given the context.

42:55-48:47: Jason brings up some interesting points on how censored campuses have become due to political correctness.

48:47-59:03: Virginia talks about the controversy over the article she wrote about creationism.

59:03-1:03:09: The two have a laugh about writers that have moved from The New York Times to Yahoo News, and then get back into the different systems of belief around creationism.

1:03:09-1:06:40: Virginia shares a story about a very powerful Tweet that she came across during the whole creation controversy.

1:06:40-1:10:22: Jason gives an interesting interpretation of the film “Prometheus,” and why science fiction is a manifestation of our longing to figure out why we’re here.