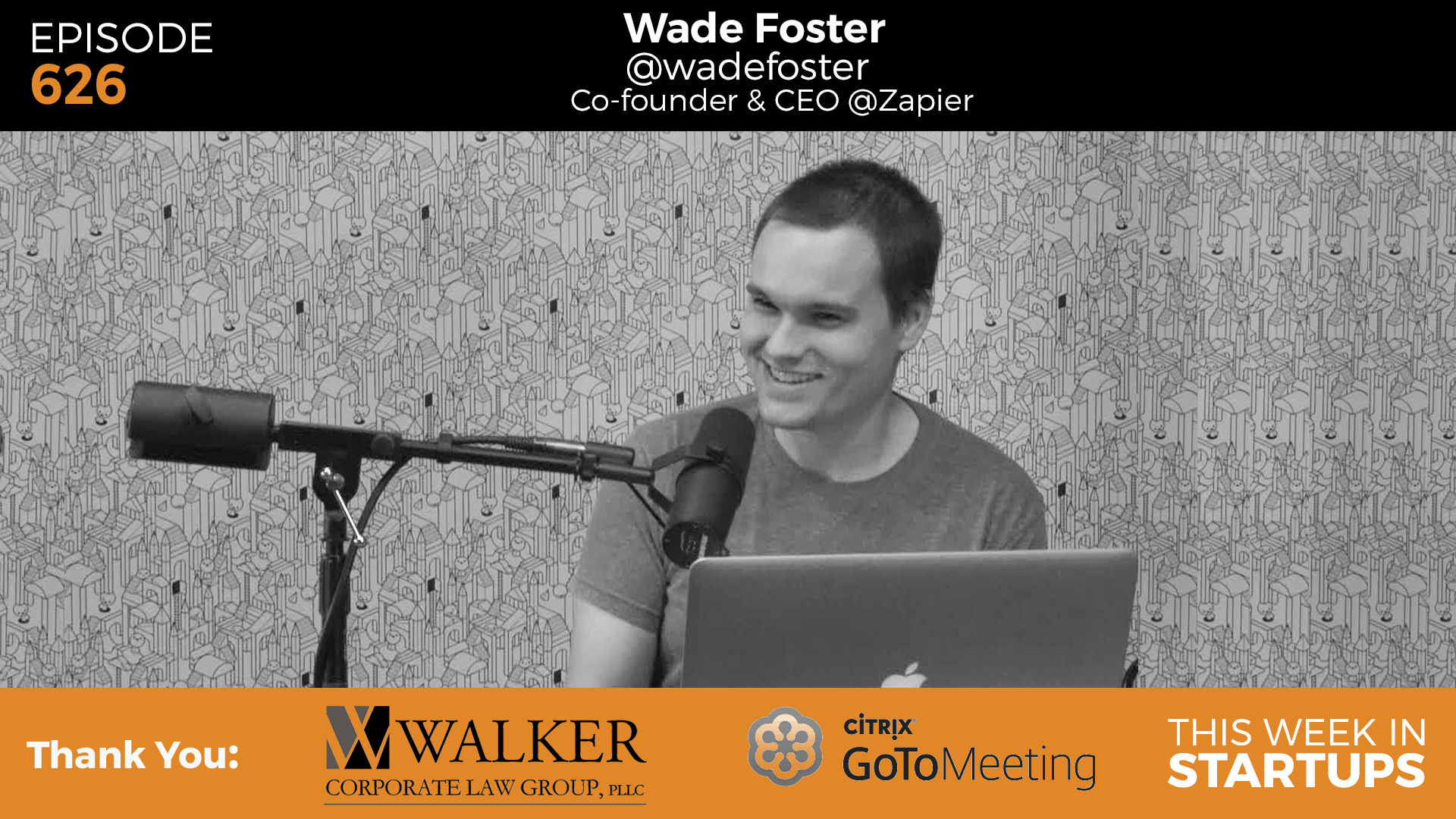 In episode 626 of This Week in Startups, Jason sits down with Zapier CEO and co-founder Wade Foster. Through the lens both of their experiences with Zapier – Jason as a user and Wade as a founder – they discuss the origins of Zapier, how Wade and his fellow co-founders have navigated the tricky waters of incubators and raising capital in the past five years, and the future of the company. They also spend time talking about the power of automation, the future of work, and managing distributed teams. Read below for some of the highlights from the episode.

The Origins of Zapier

Jason and Wade spend time throughout the episode discussing the origins of Zapier, why Wade and co-founders Bryan Helmig and Mike Knoop built the product, and how the company has grown. From their beginnings as developers building one-off integrations to their time in y Combinator to their capital structure and revenue-generation, Wade gives Jason insight into how they’ve survived the turbulent waters of Silicon Valley and have enjoyed steady but ample growth to the point where they are a multi-million dollar company today.

In light of the ability to use Zapier to automate a variety of tasks that were formerly clerical or resource intensive, repetitive administrative tasks, Jason and Wade talk about how Zapier is part of the movement changing the future of work. They also spend time discussing the systems Zapier has built to help manage their distributed team and the accountability they’ve built into those systems.

The Future of Zapier & Integrations

Jason spends time asking Wade about his goals for the future of Zapier, and they discuss how the steady growth Zapier has seen in the past few years is a good trajectory for the company. Wade talks about how working with big companies like Google and Microsoft differ from small-to-medium size companies, how B2C company integrations and APIs differ from B2B companies, and how Zapier plans to meet all of these opportunities going forward.

12:18 – 17:09: Wade and Jason discuss the idea of multi-step Zaps and how these could be stacked together to create chains of zaps, and how this will affect the future of work

17:05 – 19:54: Jason asks Wade about how integrations are added to Zapier, and they chat more about the business model.

25:44 – 28:00: Jason asks Wade about Twitter and their recent changes to the API, and Wade discusses the differences between how B2C and B2B companies approach API integrations and stickiness for the end user.

28:00 – 31:04: Wade and Jason continue talking about Twitter’s API openness, and what options they think Twitter has going forward.

34:25 – 39:31: Jason asks Wade about the future of Zapier, the invisibility of the tool, and their new concierge program.

39:31 – 43:05: Wade and Jason talk about the internet of things and how it will connect to the future of the company, and about the Amazon Echo.

43:06 – 46:00: Jason asks Wade about the integrations he’s most looking forward to adding to Zapier someday, and the future of enterprise and workflow designers related to Zapier.