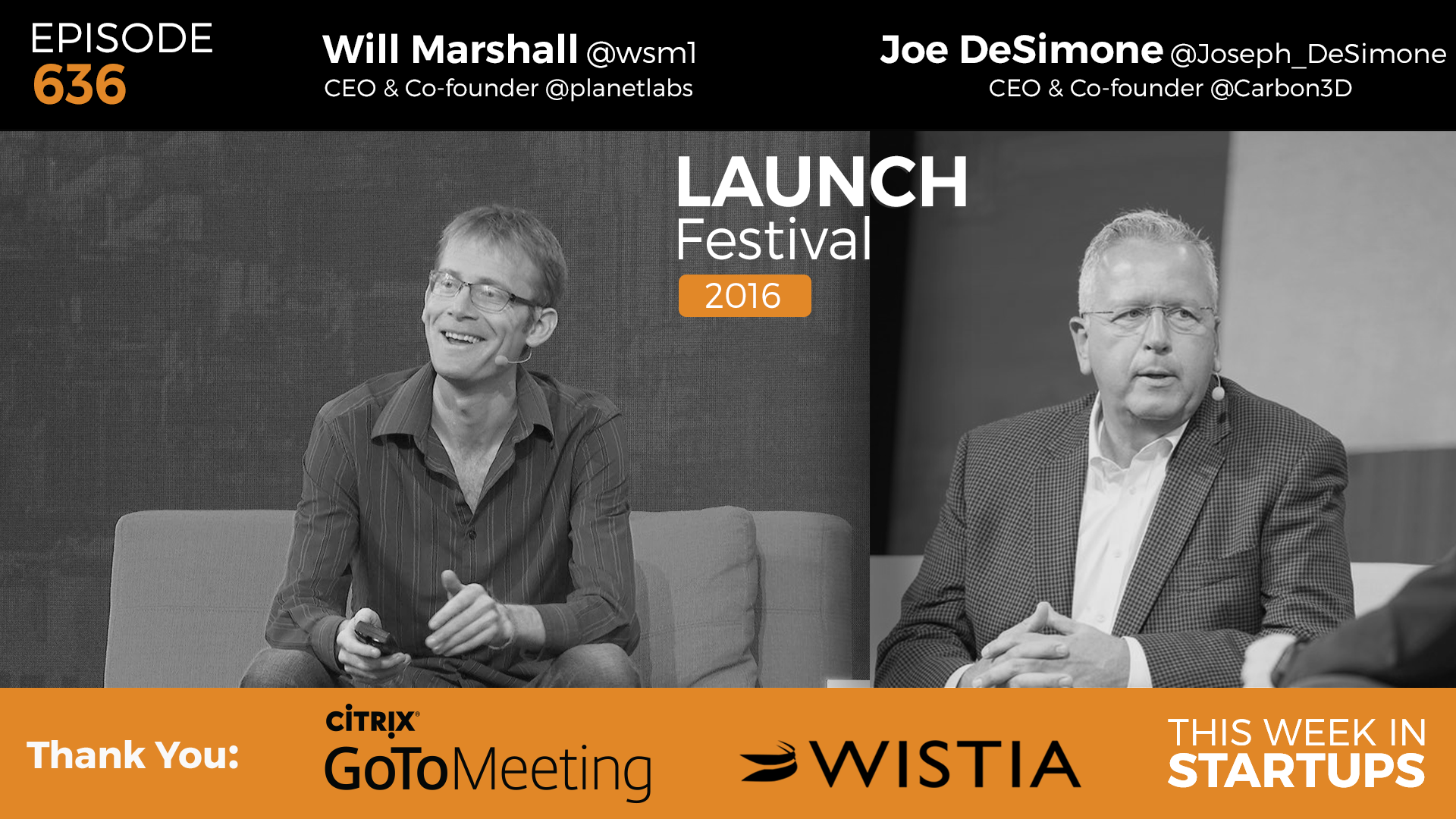 Filmed on the LAUNCH Stage at the 2016 LAUNCH Festival, Joe DeSimone of Carbon3D and Will Marshall of Planet Labs demonstrate why their companies go beyond the cutting edge in their respective industries. First, Will Marshall brings in one of Planet Labs’ ultra compact satellites, which, having deployed over 150 into orbit, are creating a hyper-efficient Earth imaging system with virtually endless application possibilities. Then, Jason sits down with Joe DeSimone to find out what Carbon3D brings to the market, and how their innovative new approach to 3D printing is creating stronger, more sustainable products from higher quality materials.

By offering satellites that are literally 1/1000th the mass of a typical satellite, Planet Labs has reduced the cost of deploying their machines by exponential figures. This has allowed the company to create a system of 150 satellites that will take real time images of every single point on Earth every day. They do this through a process they call a “line scanner for the planet.”

Will Planet Labs open up their API?

Jason asks about the possibility of opening up the platform for developers to play with the imaging and data. Will confirms that Planet Labs has already made their platform available at planet.com. There is virtually no limit to the applications that could be created through these satellites, so Planet Labs strongly encourages developers to manage new and innovative ways to utilize the data.

Tracking deforestation and aiding in disaster relief efforts are only two of the many ways in which Planet Labs’ project will be of the utmost importance in the coming years. Missing planes, such as MH370, will be a thing of the past. In Haiti’s situation, post-disaster imaging was prevalent, but there were not updated images prior to the earthquake, so it was extremely difficult to figure out what had happened… this will not be a problem anymore as Planet Labs is expected to capture daily imaging of the entire Earth by the end of the year.

The “chasm” between 3D printing and 3D manufacturing

Joe DeSimone recognizes that the 3D printing’s only applicable purpose at the moment is for prototyping. Carbon3D seeks to close the bridge between prototyping and manufacturing to create real, industrial grade products that can go directly from the printer to the consumer. Through a new, faster process called CLIP (continuous liquid interface production), Carbon3D can now utilize stronger, more durable materials such as elastomer, cyanate ester, and polyurethane to make quality products ready for immediate use.

Focus on building the parts

Jason asks about the future of 3D printing, “Are we going to eventually have cars 3D printed?” Joe believes that it is going to start with printing the components of the car. “The biggest opportunity for 3D is that complexity becomes free.” At Carbon3D, they are able to build extremely complex car parts with maximum efficiency, perfect replication, and consistent repetition. The conversation turns to 3D applications in the medical field and the future of “bioprinting.”

1:02-3:00: Jason introduces Will Marshall, Founder of Planet Labs, who reveals a model of the ultra compact satellites that his company builds, and explains their basic functions.

3:00-3:49: Will shows a video of a few of the satellites being launched from the International Space Station.

3:49-4:57: The Mission: “To image the whole world every day, and make global change visible, accessible and actionable.”

5:37-7:00: Will explains how important personal privacy is to the company. The goal is to keep the resolution at a place where they can see a tree, but not a face or read a license plate.

7:00-12:34: Will shares some examples of the data that Planet Labs is collecting from crop yields to deforestation, construction, and much more.

14:16-17:18: Jason inquires about the relationship between Planet Labs and SpaceX.

17:18-19:10: The applications of this technology will have an enormous impact on search and rescue.

19:10-20:02: Jason asks about the possibility of opening up their platform to developers on planet.com.

20:02-23:22: Are we going to find life on another planet in our lifetime? Will believes it is incredibly likely, upwards of 90% probability.

23:22-28:58: Jason asks why Will feels that Elon Musk should be focusing on creating a colony on the moon rather than Mars.

33:40-35:13: Joe explains the applications of Carbon3D in the realm of life sciences, particularly in the medical field of orthodontics.

35:13-37:59: Jason asks about 3D printing houses and large projects. But Joe believes that the important contribution 3D will have is in smaller, more complex parts.

37:59-41:29: The ability to watermark individual parts with data is the future of building safer, more efficient individual products, and Carbon3D is leading the way.

41:29-43:59: Joe explains his background in material sciences, and how he got into the field of 3D printing.

43:59-44:46: Moore’s Law and the ability to build in three dimensions with one very powerful tool… light.

44:46-48:32: Jason brings up an important point on the future of strength in these 3D printed parts. Joe explains that the complexity with their process opens up a whole new world of possibilities for stronger parts, limited only by human imagination.